In An Island Wedding

To say “yes” in a Polynesian island wedding in The Islands of Tahiti is to create a unique wedding experience that will make the most wonderful day of your life even more special. To help you prepare for the big day, French Polynesia has passed several new laws making it easier for foreign nationals to get married and elope in our dream location.

In order to have an island wedding in The Islands of Tahiti, both parties must be at least 18 years of age to be married. The law requires that neither party can currently be married nor can they be directly related. Each spouse should be physically present for the marriage and must exchange  vows in front of a witness who is 18 years or older.

It’s important to note that all wedding and elopement ceremonies are performed in French. If the couple isn’t fluent in French, they can choose an interpreter to be present to translate all questions in the ceremony. Ceremonies for French nationals or residents of a French territory are not permitted. Once all the rules have been followed, the couple can choose which commune they wish to be married in and submit two sets of dates. Note that in French Polynesia you can’t get married or elope on a Sunday or a national holiday. 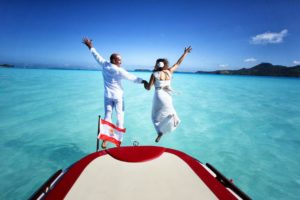 In order to have an island wedding or elopement in The Islands of Tahiti, requirements include a form of ID and birth certificates dated no more than six months prior to the date of the wedding accompanied by an “apostille” (or internationally accepted legal document) with a certified French translation for both documents. If the birth certificates do not specify, a certificate of custom, non-married status or capacity to be married must be supplied attesting that the parties are not already married. If necessary, death certificates or divorce documents translated into French must be presented as well as proof of residence and a certificate of a legal announcement with non-opposition (concerns only countries where announcement publications are required by law).

In addition, to have their island wedding or Tahiti elopement, either the couple or their wedding planner will also need to write a letter to the mayor of the commune in which they wish to be married, then fill out and mail the “Foreign Weddings in French Polynesia” document. Each of these documents must be sent to the mayor’s office of your chosen commune at least 45 days before the wedding date and the mayor’s office will confirm the time and date of the ceremony.

Once all the administrative details are taken care of, the mayor’s office will declare the wedding or elopement ceremony by putting an announcement on their bulletin board.

On the day of the island wedding, the couple, witnesses and guests must be at the mayor’s office at the scheduled time for the ceremony. According to public law, the doors must remain open during the ceremony. At the end of the ceremony, the mayor will give the new married couple official documents that certify the union.

After this, it’s up to the future married couple to bring the French documents to their own country of residence and legalize the wedding under those laws.

This unique cultural experience will turn your island wedding into the romantic, authentic and magical day you’ve always dreamed of.

You’ll find details of the steps necessary for foreigners to get married in French Polynesia as well as a list of people and agencies that can help you with the event. These agencies can also help organize a civil ceremony and a traditional Polynesian wedding ceremony in The Islands of Tahiti.