Tahitian Vanilla, the Flavor of Paradise

Imagine the taste of vanilla and you might be imagining the taste of your childhood. Ice cream cones on a hot day, the sweet taste of a warm birthday cake, or a number of other favorite vanilla-flavored baked goods. Unfortunately, most people don’t encounter authentic vanilla in the packaged foods that we mostly associate the vanilla flavor with, and even fewer are tasting authentic Tahitian vanilla, which is only grown in The Islands of Tahiti. 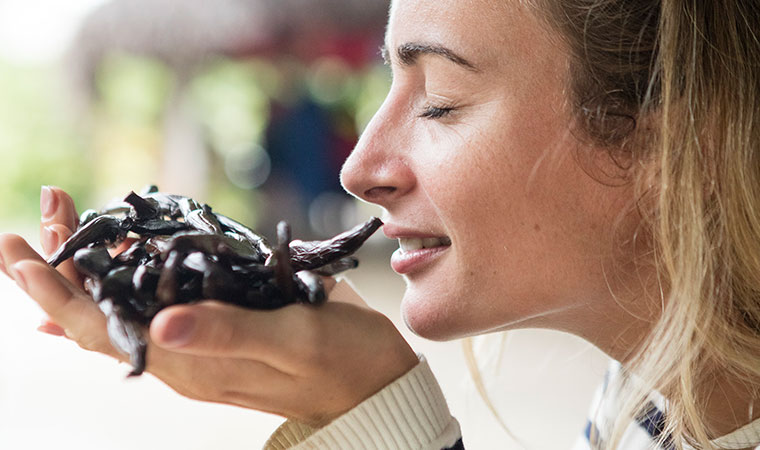 Tasting Tahitian vanilla is a different experience entirely. It is extremely complex and is used in Tahitian cooking for not only sweet confections but also savory dishes. Tahitian vanilla extract is luxurious, intensely aromatic, exotic and even sensual. The flavor profile has notes of sweetness, cherry, and spice.

Lacking in depth and sophistication, most artificial vanilla is made from a synthetic version of a natural compound called vanillin, a chemical that can be found in wood pulp,  which bears no resemblance to the fragrant, juicy Tahitian vanilla beans of French Polynesia. Once you understand what it takes to produce even a single Tahitian vanilla bean, you will understand why it is the second most costly and valuable spice in the world – second only to saffron.

How Does Tahitian Vanilla Compare to Other Vanillas?

You may be surprised to learn that vanilla beans are actually the fruit of an orchid, specifically Vanilla planifolia, the only fruit-bearing orchid in the Orchidaceae family. Originating in Mexico, the indigenous people that first began cultivating it believed it to be the food of the gods. It was brought to Europe by Hernán Cortés in the 1500s. The Spanish maintained a hold on production for centuries, as the only way for the orchid to produce a vanilla pod was through fertilization with the assistance of a bee that is native to Central America. 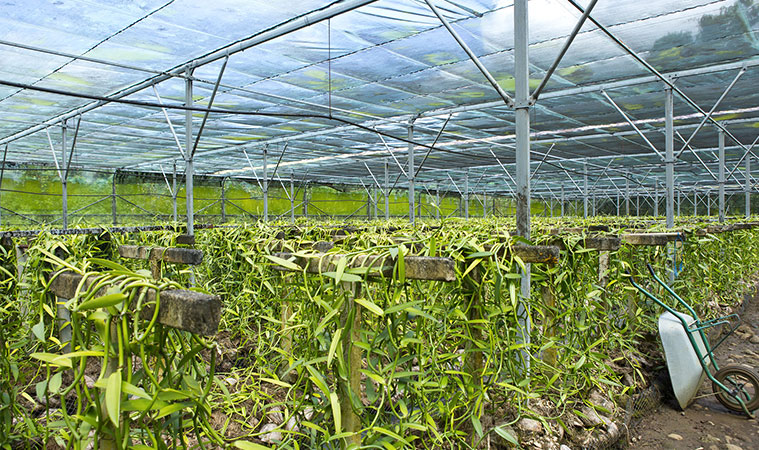 It was in a French colony in the Indian Ocean that it was finally revealed how the vanilla pod could be hand-pollinated, allowing it to be grown elsewhere in the world. However, its range is still limited to tropical destinations within 20 degrees to the north or south of the equator. More than 70 percent of the world’s vanilla still comes from the Indian Ocean region, in Madagascar and Réunion. The vanilla produced in the Réunion can also be referred to as Bourbon vanilla and has a slightly different taste and aroma compared to Tahitian vanilla.

While it is possible to hand cultivate Vanilla planifolia in other places, Tahitian vanilla is unique even among these hand-cultivated varietals due to the fact that it is actually a hybrid of two species which were bred together to create Vanilla tahitensis or Tahitian vanilla. It is a unique species of vanilla bean that has a thinner stem, oval leaves that are longer than they are wide and also has a darker green color.

Being a unique species is not the only reason why vanilla from Tahiti is one of the most prized and costly spices in the world. Tahitian vanilla production is an extremely labor-intensive process that results in small crops. Nearly 80 percent of Tahitian vanilla beans are grown on the island of Taha’a, an island that is only 35 square miles, located in the Society Islands about 150 miles east of Tahiti. 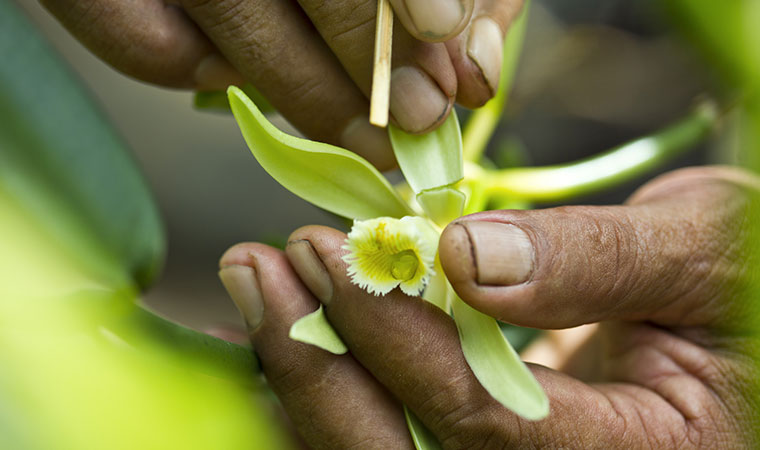 How Tahitian vanilla is actually pollinated is probably the most fascinating aspect of the spice. The bees used to pollinate the vanilla orchid are not native to The Islands of Tahiti and so each delicate vanilla flower is pollinated by hand. It is only during the months of July and September when the plants are flowering that the farmers rise early to hand pollinate each orchid bloom. In addition to the season being very short, each flower only blooms for about six hours, so the farmer must move quickly,  yet delicately, to ensure each flower is pollinated before it closes and withers away. The flowers which are pollinated grow the Tahitian vanilla bean.

A tropical paradise, Taha’a shares its lagoon with its sister island, Raiatea. The beauty of the lagoon rivals that of even Bora Bora, with crystal clear and sparkling in hues of azure, cerulean and dark velvet shades of blue. When staying at the luxurious Le Taha’a Island Resort & Spa or Vahine Island Resort & Spa, it is worth it to schedule a tour to an authentic Tahitian vanilla bean plantation. Here is where you can really appreciate the artistry of Tahitian vanilla. It is possible to visit Tahitian vanilla farms on Huahine, Bora Bora, and Tahiti as well.

Unlike other species of vanilla, Tahitian vanilla must be picked at maturity, meaning it must ripen on the vine before being harvested. There is a lengthy process that the vanilla bean must go through before it is ready to be sold. Altogether, it can take about nine months to develop a dried vanilla pod for culinary use. In order to transform the odorless fruit into a juicy Tahitian vanilla pod, it must first be washed and then placed so it can enter the drying and curing stage.

Other types of vanilla go through an initial step called “killing,” in which the pod is scalded to stop growth which prompts the release of enzymes. This is called the indirect method of curing vanilla and when allowed to occur naturally, it is called the direct or natural method. Rather than scalding the vanilla pod after harvesting, the pod is allowed to cure slowly through alternating exposures in the cool shade and warm Tahitian sun. 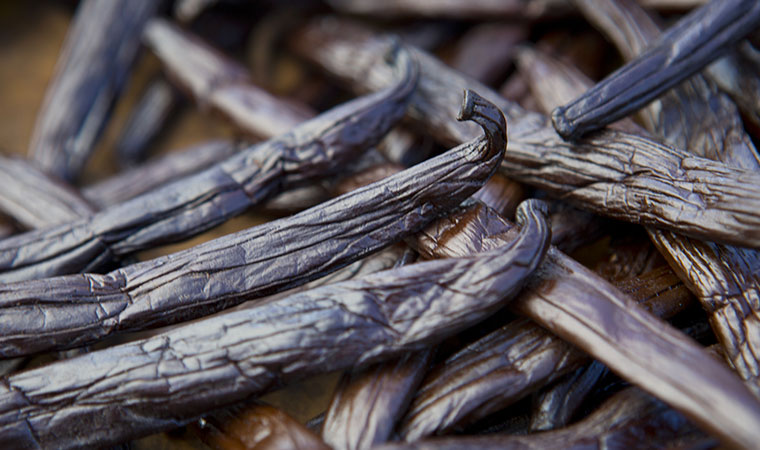 During the drying process, the vanilla bean starts to lose moisture which helps intensify the flavor. It is during this time that the aroma and vanilla taste of the pod starts to develop and concentrate. The humidity of the vanilla bean is then put through stages, moving from 80 percent to about 45-55 percent. Oil begins to cover the surface of the pod, which becomes soft and shiny, creating a satiny texture to the vanilla bean.

The vanilla pod is then massaged by hand to help distribute the oils and keep the bean supple. From here, the vanilla beans are sized and are sorted into three categories: Extra (at least 16 cm), First (less than 16 cm) and Second. These categories are only used for processing. The last step in the vanilla pod cycle is conditioning where the vanilla pod is bundled and bagged for sale. The finished Tahitian vanilla bean product is 100 percent pure, natural, grain-free, gluten-free, allergy-free, sugar-free, vegan, kosher, and non-GMO.

You can tell from looking at the Tahitian vanilla pod that it is something special. They can be as large as 16 cm and the finished vanilla beans are a bronzed deep brown, almost auburn, with a slightly glossy finish.

The Tahitian vanilla flower is tinged with a creamy pale yellow. One vanilla bean flower produces only one fruit and flowers for only a few hours, so each flower is very precious. The vanilla beans grow in clusters that are usually staked either outdoors or in a greenhouse to better control humidity. A typical vine should produce about 50 to 100 beans per year. Growers do not pollinate every flower as doing so can result in an inferior vanilla bean quality or disease. A vine will remain productive between 12 and 14 years.

There are many culinary uses for 100 percent pure Tahitian vanilla extract, which is why it is a favorite among the world’s best pastry chefs. One of the easiest ways to enjoy Tahitian vanilla is to place it in a bag of sugar or a bottle of rum (preferably Tahitian rum!) and allow it to impart its flavor over the course of several weeks. The sugar can be used in pastry creams or placed directly in baked goods. Placing the Tahitian vanilla into coconut oil can also create a wonderfully fragrant body oil or cooking oil. 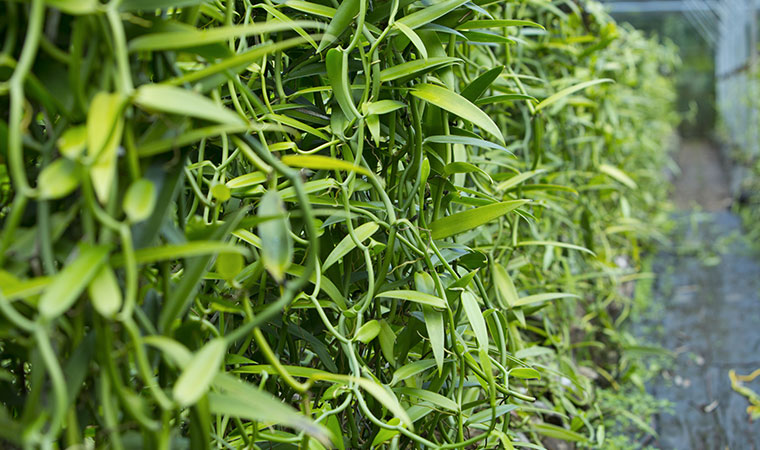 When traveling through The Islands of Tahiti, you will find many forms of Tahitian vanilla, from whole pods to powders and even a lush paste full of thousands of tiny vanilla bean seeds, also known as vanilla caviar.

The traditional cuisine of The Islands of Tahiti has many uses for Tahitian vanilla. It is delicious when the vanilla caviar is mixed in with banana po’e, a rich custard of banana, coconut and manioc (similar to tapioca) or of course, vanilla ice cream! In The Islands of Tahiti, Tahitian vanilla is also often used for savory dishes, particularly as a sauce for seared mahi-mahi or other types of fresh fish dishes and seafood.

Tahitian vanilla is sold on Tahiti and many other islands. However, the best place to purchase it is from the plantation itself. At the plantation, the price is usually best, you can meet the grower in person, and you may also get to experience the heady aroma of Tahitian vanilla in the warm tropical breeze straight from the source.

To purchase Tahitian vanilla during your next visit, make plans to stop at the Le Marché de Papeete (Market of Papeete) on Tahiti or visit an authentic Tahitian vanilla farm on the island of Taha’a. Explore Taha’a vacation packages.