The National Flower of French Polynesia

The Tahitian gardenia, also known as the Gardenia taitensis, or by its original Tahitian name of tiare mā’ohi, is the national flower of The Islands of Tahiti. Most commonly referred to as the Tahitian tiare flower, this type of gardenia has become a staple in Tahitian culture. The name tiare is derived from the word “tiara,” suggesting that the tiare flower is the queen of all the flowers in French Polynesia. In Tahitian, ti refers to a strong presence and are means perfume, scent or fragrance. By putting the words together, tiare quite literally means, ‘a strong fragrance.’

The Tahitian Gardenia in Tahitian Culture

The tiare flower is a symbol of Tahitian culture, people and life. With all the uses of the tiare flower, it is estimated that around 110 million flowers are harvested a year throughout French Polynesia. The tiare is often sung about in songs and spoken of in Tahitian legends. 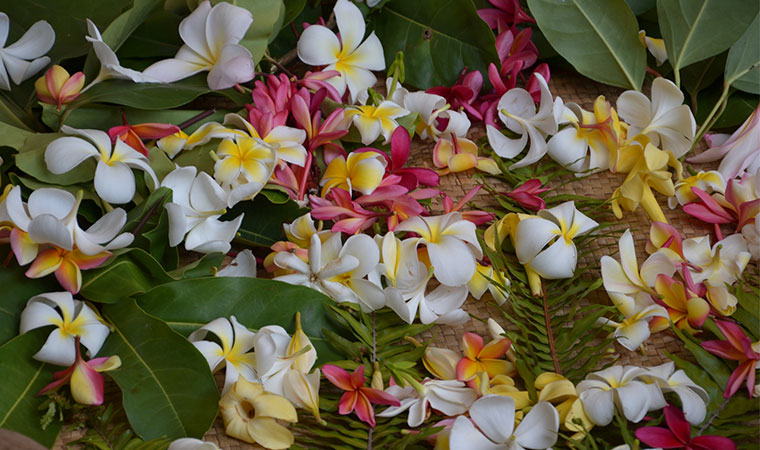 In ancient Polynesian mythology, the tiare flower was introduced by the god Ātea. Ātea served as the guardian of the world of men and offered the sacred flower as a gesture of peace to proud mortal men. The flower was accepted by the men and motivated them to abandon their prideful ways and adopt a more loving lifestyle. To have the flower maintain its positive power, Ātea engraved his love into the heart of the flower. The tiare flower has remained a symbol of harmony ever since.

Because of its connection to the gods, the tiare was reserved for the elite. Only royalty was allowed to own and harvest the plant. The tiare flower was also frequently used during religious ceremonies. The eldest virgin daughter of the ari’i (chief) would wear a crown of tiare flowers, which represented the young woman’s purity. The young women who participated in the ceremony would take baskets full of the flowers and spread them over religious sites as a way to purify the sacred place and destroy wicked spirits.

The Islands of Tahiti: A hidden paradise that is closer than you may think! #tahiti #beautiful #paradise #romance #luxury

In modern times, tiare flowers are worn daily in The Islands of Tahiti. Women usually wear opened flowers behind their ears, while the men wear their flowers unopened. Wearing a flower behind the right ear means that that person is romantically available while wearing it behind the left ear means that person is unavailable. The presence of the flowers is amplified during festivals such as Heiva i Tahiti, or at other local celebrations and events.

Many Polynesians also use the flower for rā’au Tāhiti (Tahitian medicine) to alleviate common ailments such as headaches, sunburns, bug bites and the common cold. All stages of the flowers are used for treatments from when the flower is in the ‘ūmoa state (young flower bud) to the tiare ‘ūa’a (the flower bud opening), and even the tiare marō (dried flower). For example, Tahitians will use a tiare flower in the ‘ūa’a state to treat an infected wound. The flower is often soaked and ground with other ingredients to create homemade remedies.

Once fully bloomed, the flower boasts, on average, five to eight small, thin white or cream-colored petals with shiny evergreen foliage. The petals are very soft and delicate.  The flower can take on several shapes from that of a pinwheel-shape to a star. This type of gardenia has a rich floral scent that is reminiscent of tuberose. 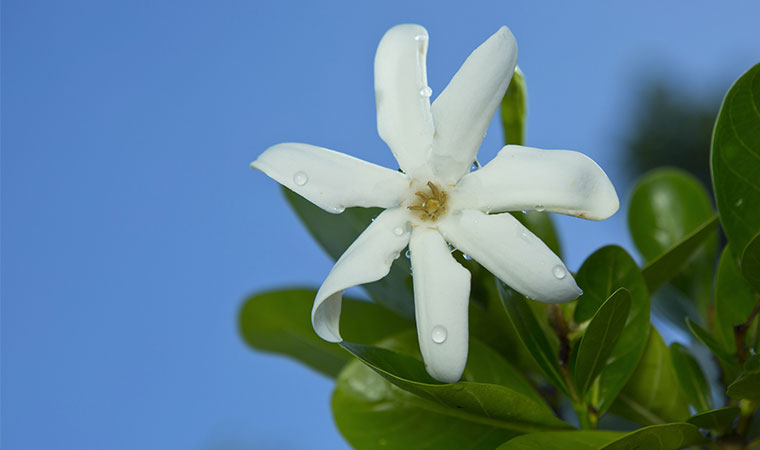 How Does the Tiare Flower Grow

The tiare flower is indigenous to the South Pacific, therefore, the flower thrives in warm tropical climates. The plant requires full to partial sunlight and frequent watering to blossom. Overwatering will cause it to wither. The tiare flower grows on a bush that can be up to 20 feet tall during the blooming season which coincides with the islands’ dry season (March to November).

It is best to harvest the flowers during this time. The flowers usually open up at dusk and can remain open for several days without fading. Harvesting the flower is typically done around dusk as well. To preserve the flowers after being plucked, they should be delicately placed in a basket in alternating directions. Many Tahitians wrap the flowers in ti leaves to keep them fresh.

Because the flower thrives in tropical climates, it can be found throughout The Islands of Tahiti, such as the volcanic main island of Tahiti, the Marquesas, and in the Australs, Gambier and Tuamotu islands.

Uses for the Tiare Flower

The tiare flower has many uses throughout The Islands of Tahiti, from beauty to medicine and even décor. As a gesture of warm welcome and hospitality, guests visiting French Polynesia are customarily greeted with a lei (flower necklace) made of unopened tiare flowers. The flowers are also sewn into flower crowns that are worn during festivals and events. 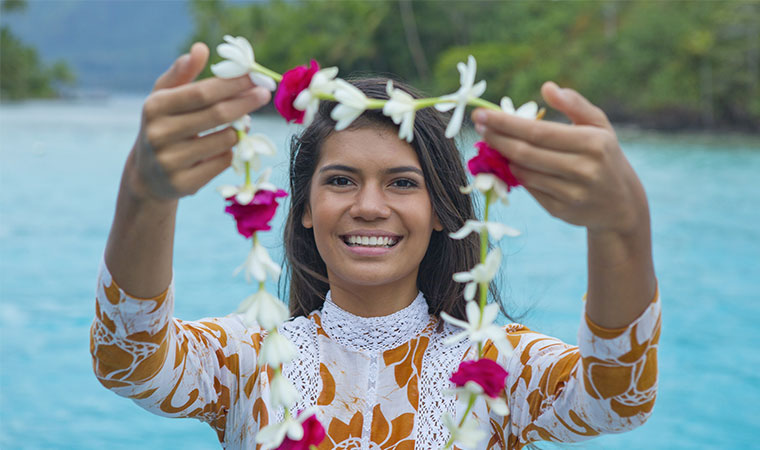 Many Tahitians also place the flowers in a water-filled saucer so that its poignant fragrance is released throughout their home.

The petals of the tiare flower are traditionally soaked in coconut oil which creates the renowned monoi oil. Monoi oil has been incorporated into many hair and skin products including bar soap, shampoo, tanning oil, and bug repellent. Its exotic aroma is often described as having a sweet floral scent with a mixture of chocolate, honey, and subtle earthy notes. Monoi oil is an essential staple in Tahitian beauty practices.

Want to see the tiare flower for yourself? Talk with a Tahiti specialist to plan the perfect Tahitian vacation.