Flights to Tahiti Are Getting Easier & Cheaper

Nestled in the South Pacific, The Islands of Tahiti can feel like another world. With lush vegetation, tropical flowers blooming everywhere, thatched huts, white, pink, and black sand beaches, palm trees, crystalline waters and very few crowds – the islands are a sought-after destination regardless of the season. The experience is simply unforgettable. Perhaps that is why
The Islands of Tahiti have been synonymous with paradise and romance for decades.

However magical French Polynesia is famed to be, The Islands of Tahiti are not a mythical destination. It is very real and surprisingly easy to get to. If you’ve been on the fence about a trip to The Islands of Tahiti, now is the perfect time. Whether you’d rather fly or take a cruise, getting to Tahiti is becoming easier and cheaper than ever before. 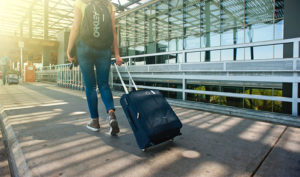 When flying to Tahiti, you will touch down in Papeete on the island of Tahiti at Faa’a International Airport. It takes about eight hours from Los Angeles or San Francisco when you book a nonstop flight to Tahiti or less than six hours from Honolulu. Round trip tickets from Los Angeles or San Francisco to Papeete often cost less than $1,200 per person. Fares will vary according to the season, demand, fuel prices and other factors, so be sure to check often.

If you are watching your budget, you might be able to save money on flights to Tahiti by visiting the islands during the off-season. Tahiti’s summer coincides with winter in the United States. During this time, flights to Tahiti tend to be cheaper and so might some accommodations. The weather is a bit warmer than other times of the year, too, but the average temperature is about 80 degrees Fahrenheit year-round. Plus, there is an ever-present breeze thanks to the water, which makes even a very hot day more comfortable.

Flights to Tahiti are also cheaper and easier when you book a vacation package. Depending on your interest, you can find newlywed packages, diving packages, family packages with fun for all ages, Tahitian Guesthouse or overwater bungalow packages for romance and so much more. Almost all vacation packages include roundtrip airfare from California and your accommodations, plus many have meals, activities and airport transfers included. Prices start at just over $2,000 a person.

If you’d rather cut down on your time in the air, you can always opt for a cruise. Move from the bright royal blue of the ocean to the soft azure water of the Tahitian lagoons. The islands seem to rise from the water, and the scent of flowers and vanilla lets you know you are close, sometimes long before you see your destination on the horizon. Cruise costs will vary. In general, if you leave from Honolulu or Los Angeles, you can expect 18 to 28 days at sea; prices start at roughly $2,000 per person. There are also several sought-after cruises within French Polynesia, that embark from Papeete which include 7, 10, 11, and 14-day cruise packages.

Most of The Islands of Tahiti remain wild or virtually untouched. With its miles of sandy coastline, quiet lagoons and relatively few tourists, The Islands of Tahiti make you feel like you’ve found your own private corner of the world—but don’t let that impression fool you. While you can’t put a price tag on the unforgettable experience of Tahiti, flying to Tahiti is easier and cheaper today than it has ever been, come see for yourself!