History of the Tahitian Ukulele

The Tahitian ‘ukulele, also known as the Tahitian banjo, Tahitian uke or the Polynesian uke, is a handcrafted string instrument that is in the lute family. This style of ‘ukulele has eight strings with four double courses. This special ‘ukulele is strummed very rapidly with a pick or quick fingers. Whether the ‘ukulele is played by hand or with a pick is usually up to personal preference.

The Tahitian ‘ukulele is not only used to greet visitors but can be heard throughout the islands at parties, festivals, and other cultural gatherings.

How the Tahitian Ukulele is Made

Tahitian ‘ukuleles are typically handcrafted from local materials. The strings of the uke are made up of fishing lines, while the head and neck are made up from either a single piece of wood or several pieces of wood. The types of wood that are used for the Tahitian uke are rosewood, mahogany, and lychee. What makes a Tahitian ‘ukulele different than a Hawaiian ‘ukulele is how the instrument is crafted, which also affects its sound. The Tahitian uke has a higher and thinner sound and is strummed much faster than its Hawaiian cousin. The A note is low rather than the G note being high, meaning the C and E are tuned at higher octaves than other ‘ukuleles. The Tahitian uke also does not have a hollow sound box, either. 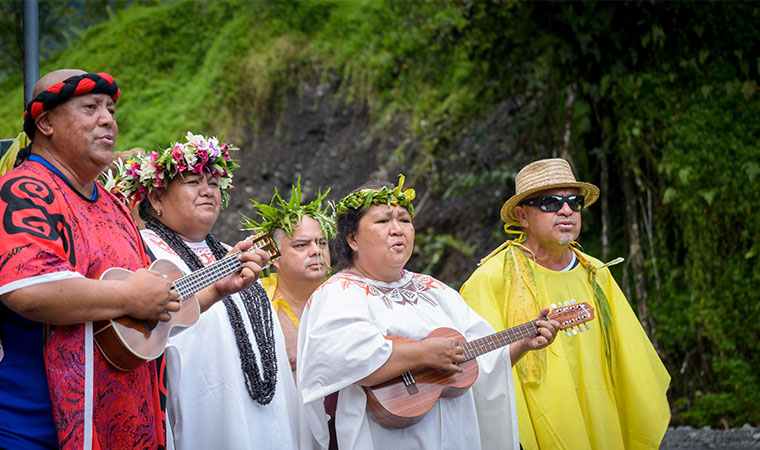 A wide hole is cut in the front of the body of the uke but is covered by a piece of wood forming the sound box. The main sound hole of the Tahitian ‘ukulele is usually cut into the back of the uke. Most ‘ukuleles are about 30 inches long and take on various shapes from a traditional ‘ukulele to the shape of marine life like sharks, turtles, and stingrays. Designs are often carved into the ‘ukulele to enhance its shape and give personality to the instrument. Many Tahitians personally handcraft their own ‘ukuleles to ensure that it creates the sound and look they want.

Where to Buy Ukuleles in Tahiti 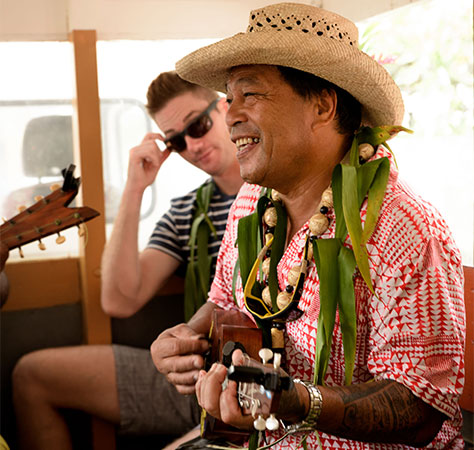 In The Islands of Tahiti, ‘ukuleles can be found all over. The most popular location to find a Tahitian ‘ukulele would be at the Le Marché de Papeete (Market of Papeete) on the island of Tahiti. Another great location to pick up a souvenir ‘ukulele is at Woody Howard’s on Moorea. While more extravagant and intricate than what you would find at the marché, ukes from Woody Howard’s are made from a rare wood, Cordia Subcordata, or called Tou in the islands, and are used by professional musicians. Tahitian ukes can also be purchased at Faa’a International Airport as a great parting gift.

‘Ukuleles are played throughout The Islands of Tahiti. The sound of the Tahitian ‘ukulele is resounding during festival season. At Heiva i Tahiti, the finest ‘ukulele players come out to the annual festival to showcase their musical skills alongside singers and dancers.

In 2015, more than 4,000 people gathered in Papeete to perform in the largest ‘ukulele band in the world to secure a title in the Guinness World Records.

The international festival attracted more than 5,000 people. The world record has since gone to Hong Kong; however, attempts have been made by The Islands of Tahiti to regain their title.

Are you a ‘ukulele lover? Whether you know how to play this unique instrument or not, you may want to consider the Conservatoire artistique de la Polynésie française – Te Fare Upa Rau. The Artistic Conservatory of French Polynesia offers eight different types of classes which include traditional dance, the instruments (‘ukulele, traditional guitar, traditional percussions), singing classes, and a class that focuses on Polynesian culture and language. Learn how to play the uke like a true local while you’re visiting. For info visit Conservatoire Artistique