Tahitian noni juice is touted as a cure-all, medicinal drink that is enjoyed by fashion and fitness celebrities and holistic health practitioners all over the world. The elixir is praised as the solution to everything from problem skin and aging, to gout and inflammation issues, and much more. However, Tahitian noni juice as a miracle health cure has humble beginnings as a very common fruit found everywhere throughout The Islands of Tahiti and other regions of the South Pacific.

In a land known for an abundance of delicious fruits such as delectable pineapples, sweet coconuts, juicy grapefruits, and a wide variety of other tropical fruits, the eccentric Tahitian noni fruit stands in a class all its own.

One of the most prevalent wild fruits you will encounter when exploring The Islands of Tahiti is Tahitian noni fruit or morinda citrifolia. It is widely available and easy to spot due to its very strange appearance and strong odor. The fruit is oblong in its shape, similar to a potato, and is typically between 3.9 and 7 inches in length. It can be green, yellow, white or even a milky translucent color depending on its level of ripeness. It is a very unusual looking fruit, with bulging amphibian-like skin, covered in bumpy, wart-like growths.

The noni fruit can be found throughout Southeast Asia and the Pacific Islands. The plant bears fruit year-round and can tolerate a range of soil types. The tree reaches maturity in about 18 months and yields up to 18 pounds of fruit per year.

Despite its appearance, the Tahitian noni fruit was eaten by ancient Polynesians during bouts of famine, which is why it is sometimes called the “starvation fruit.” Historically, the green fruit, leaves, roots, and rhizomes have been used medicinally to cure a range of ailments from arthritis, rheumatism, menstrual or abdominal pain, hypertension and more.

There are more than 40 traditional cures associated with the noni fruit. Though similar in that they are both green with a knobby texture, noni fruit should not be confused with its larger and more delicious cousin, breadfruit (sometimes called uru, picture featured below). 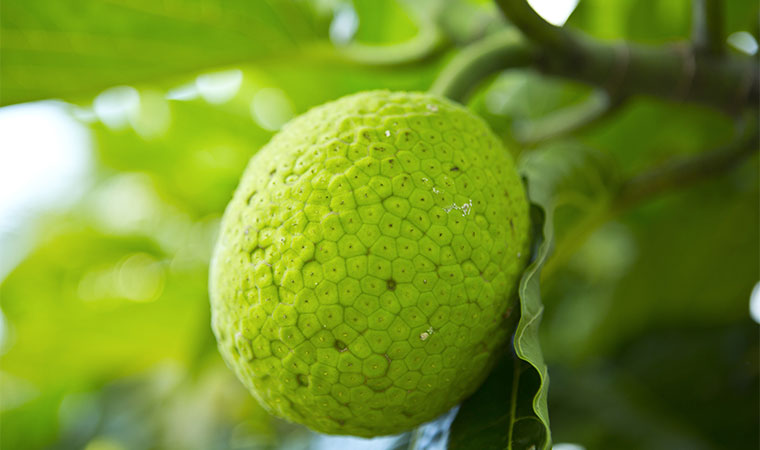 While noni is rarely eaten in its fruit form, breadfruit is a staple of the Tahitian diet. It is so important to the diet of the Polynesians that tradition holds that a breadfruit tree should be planted at the birth of a child so that sustenance for the family can be assured even with a new mouth to feed. It is said that the size of a family can be determined by the number of breadfruit trees growing in their yard.

It is recommended that to enjoy Tahitian noni juice benefits you should take the Tahitian noni juice puree and mix it with other juices such as grape or blackberry to make it more palatable. If you would like to taste the raw fruit, try to avoid those with very green skin, and instead select one with a transparent yellowish or white skin, indicating that it is ripe.

Benefits of the Tahitian Noni

The benefits of Tahitian noni juice are legendary, with many holistic practitioners praising it for its high antioxidant and mineral qualities. It is said to be good for skin care, anti-aging, immunity boosting and even cancer-fighting due to its high concentration of antioxidants.

The Tahitian noni fruit is about 90% water but does contain minerals such as potassium and calcium, as well as high concentrations of vitamin C and niacin. Tahitian noni juice has a higher antioxidant level compared to other fruit juices. Clinical studies with humans have shown no adverse effects and some potential benefits with regular use. Trial benefits include increased physical endurance and energy for athletes, the ability to aid in weight loss and a positive potential influence on osteoporosis.

Where Can I Buy Noni Fruit?

The island of #Raiatea is considered one of #TheIslandsofTahiti’s most sacred. Rich with culture and religion, this second largest Tahitian isle is considered the birthplace of Polynesia. #LoveTahiti

Noni juice is widely available for purchase outside of The Islands of Tahiti as well. In fact, Tahitian noni juice puree is one of the country’s largest agricultural exports with more than 21,000 metric tons being exported in the last decade.

While Tahitian noni fruit is not the most beautiful or tasty of the Polynesian fruits, its quirkiness and potential health benefits have earned this humble food some great respect. During your visit to The Islands of Tahiti, be sure to look for the noble noni and if you are very brave, have a taste! Bon Appétit!