Tahitian headpieces, or Tahitian flower crowns, are common throughout The Islands of Tahiti. While they are given to visitors as a sign of welcome, the Tahitian headpiece, flower crown or HEI UPO’O as they are known in Tahitian, are not just for visitors. They are worn by locals in order to celebrate a special occasion or simply, celebrate the beauty of everyday life in The Islands of Tahiti. Seeing smiling Tahitians adorned in whimsical flower crowns is the embodiment of the common phrase: La Vie Heureuse or “The Happy Life.”

While some Tahitian headpieces can be very elaborate, it is not uncommon to see a simple crown made only from woven ti leaves. You might also see a range of native flowers woven into the Tahitian headpiece, including hibiscus, frangipani or plumeria, and of course, the greatest symbol of The Islands of Tahiti, the tiare flower. The tiare flower is also frequently worn behind the ear, or as a fragrant lei.

There are many types of Tahitian headpieces beyond the simple flower crown. Typically, you will see the more elaborate forms only in Tahitian dance numbers. The headbands are sometimes woven with palm fronds or tapa cloth which gives the headpiece structure. Intricate designs and embellishments such as flowing raffia, feathers, mother-of-pearl, or black pearl, are often added as well. 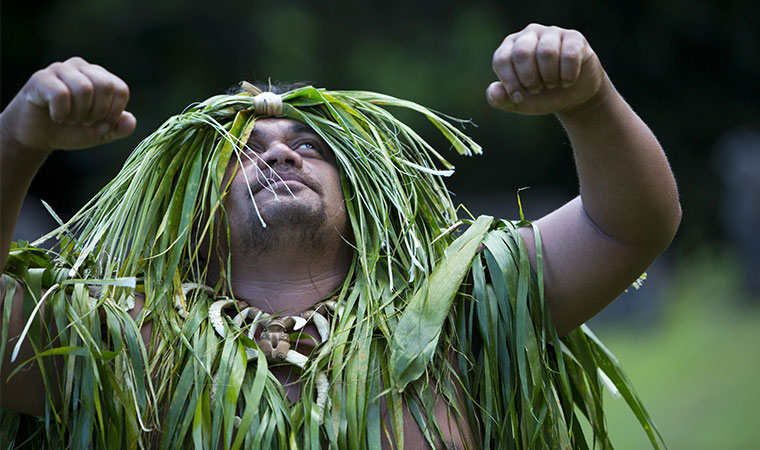 You can make your own simple flower crown using a measuring tape, wire, florist’s tape and a variety of both greenery and fresh flowers.

The first step in making your own Tahitian fresh flower headpiece is taking your head measurement. Place a measuring tape around your head about one cm above your ear, across the mid-forehead, completely circling your head. 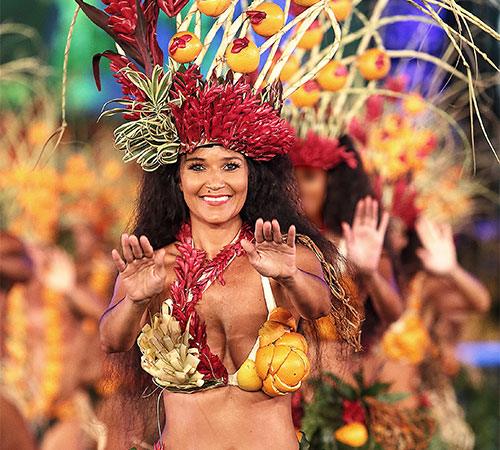 Use the measurement to cut your wire, leaving about an extra inch on either end so you can overlap the edges to close the crown. You can also double the head measurement to create two loops and make a thicker headband. Starting with your greenery, bend and wrap each piece along the band, wrapping it with the florist tape. Bunch the flowers into odd numbered groups of three to five flowers. Wrap the stems in florist tape to attach them to the band. You can choose to cover the band completely in flowers or place them strategically in key spots. Play with alternating colors and shapes to create your own unique and interesting arrangement.

Where to Find a True Tahitian Headpiece

Depending on where you are staying, you may be presented with a Tahitian headdress upon arrival to your place of lodging. When staying at a local style Tahitian Guesthouse, the family may present their guests with a welcome gift of a flower crown or lei. It is also common when you have booked a small tour that the Tahitian guides demonstrate for you the many different aspects of island life, which may include making a flower crown, cutting open a coconut, weaving a palm frond hat, or everyone’s favorite: playing the ‘ukulele while steering a motorboat … with their feet!

Many resorts offer cultural demonstrations where you can learn a variety of skills from a Tahitian “Mama,” an affectionate name for a matronly woman who is knowledgeable in crafts and culture, that will help you create a Tahitian headdress of your own. You may also buy a Tahitian headdress at the Marché de Papeete in Tahiti, too. Keep your headdress fresh by placing it in the fridge or near the air conditioner in your room once you have finished wearing it! 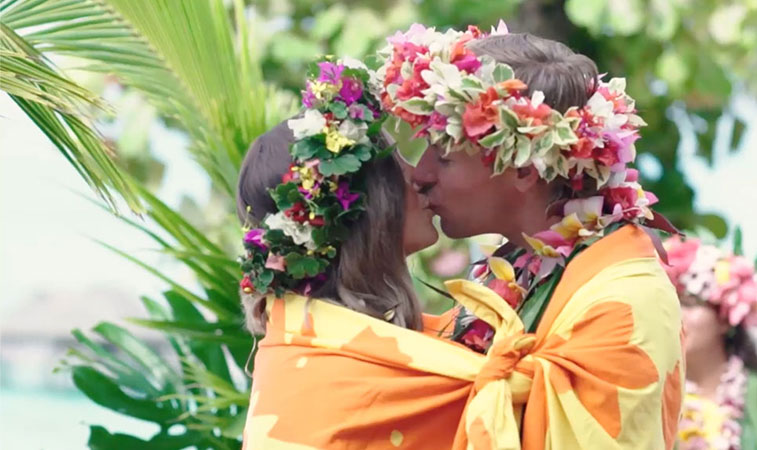 Another sure way to receive a Tahitian fresh flower headpiece is to have a Tahitian wedding or renewal ceremony. These special ceremonies are offered as packages at many resorts and can be a special way to celebrate a romantic relationship. You and your beloved will both receive a Tahitian headdress as part of the ceremony, as well as other Tahitian costume elements, such as a pareo and a lei. Browse romantic vacation packages to learn more.