Without a doubt one of the most breathtaking natural elements of The Islands of Tahiti is the sparkling blue lagoons and crystal clear waters. Diving into these waters, which are 80 degrees year round in many of the islands, offers you an opportunity to engage with a broad range of marine life.  These beautiful waters are more than just a natural swimming pool, they are also an ecosystem teeming with life. And that much of that life depends on the health of just one humble creature: coral.

What you think of as a coral is actually the exoskeleton of a tiny invertebrate. Tahitian coral reefs are often in shallow waters and this type of coral also lives in a mutualistic relationship with a type of algae that provides fuel to the coral and helps give it color. Coral bleaching occurs when a coral expels the algae leaving only the skeleton, and without fast recovery this coral will eventually die.

Even though these animals are very tiny, more than one quarter of all ocean life depends on their survival! Corals are necessary for the survival of many types of fish. The reefs in The Islands of Tahiti are filled with more than 1,000 species of fish and more than 150 species of corals.

Exploring coral reefs is an essential activity in The Islands of Tahiti, but bear in mind a few things when you visit the coral reef for your protection and the protection of the reef. First thing to know is that coral is sometimes sharp and coral cuts are dangerous if not treated properly. Always wear reef shoes, flippers, or water shoes to protect your feet. If you do get a coral cut, be sure to clean it well and watch for signs of infection.

Most of the French Polynesian coral reefs are in shallow water, fringing the land and creating a barrier to the sea, allowing for beautiful still lagoons to form around islands. Islands such as Moorea, Bora Bora, Taha’a, and Raiatea are well known for their beautiful coral reefs and high volcanic mountains. A volcanic island is a young island, from a geological perspective. The island was formed when hot spots in the earth’s crust sent volcanic matter up to the surface where it formed land. Over time a reef formed around that island.

However, there are other islands chains in French Polynesia which look very different and that is because they are no longer volcanic islands and instead have become an atoll. These atolls (found predominantly in the Tuamotu Islands) are formed when a reef forms around a volcanic island but as millions of years pass the volcanic island sinks back into the sea and all that remains is the coral reef, which continues to grown upward toward the surface.

The island of Rangiroa is the second largest coral atoll in the world. It is so large that another much smaller lagoon has formed inside it. This area, called the Blue Lagoon, is the perfect place to visit for a day and enjoy a variety of marine life and pristine motus.

Coral atolls, such as Fakarava, Rangiroa or Tikehau, are also wonderful for diving as these giant lagoons in the ocean are havens for marine life which flood in from narrow seas passes. When planning a visit to The Islands of Tahiti it is advised that you plan ahead so you can stay on a volcanic island and a coral atoll, as they both offer very different experiences.

Diving in a coral atoll can offer some very unique experiences as well. In Rangiroa and Fakarava, you can do a drift dive where currents from nearby passes surge deep under the water and can carry you effortlessly through the vibrant coral gardens below. Here you can spot Napoleon wrasse, butterflyfish, angelfish, cornetfish and even octopus and eels! Fakarava is also home to a UNESCO biosphere, where many species are protected.

The Islands of Tahiti are home to more than 1,000 species of fish and that the most colorful are found in the coral gardens and lagoons of the coral reefs that surround the islands. Larger animals such as giant manta rays, several varieties of sharks, seas turtles, and mammals such as dolphins and whales can also be found here. The coral reefs are an excellent place to go swimming with dolphins, sharks and whales. 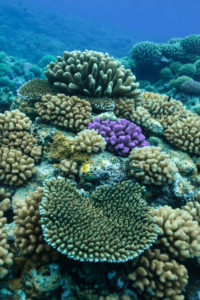 Coral reefs are beautiful and fragile environments. In The Islands of Tahiti, there are many ways to explore, learn about and protect these rich landscapes. The conservation organization Te mana o te moana works with several resorts in The Islands of Tahiti to offer visitors a chance to explore coral gardens via underwater trails. You can find an opportunity to snorkel these trails at the InterContinental Moorea Resort & Spa and the InterContinental Bora Bora Resort and Thalasso Spa or explore the Lagoonarium at InterContinental Tahiti Resort & Spa which is home to more than 200 species of sea creatures including parrot fish, Picasso fish and angelfish.

Aiming at protecting and preserving the amazing and vibrant snorkeling conditions that exist in The Islands of Tahiti, many resorts have also started introducing a Biorock program. The Biorock technique helps to activate the recalcifying process of the damaged corals, through electricity from solar energy. Once the coral are mature, biologists reintroduce them into their natural habitat, therefore repopulating reefs and coral gardens. This program is available at both Le Taha’a Island Resort & Spa and Bora Bora Pearl Beach Resort & Spa as well as the Conrad Bora Bora Nui.

You can also do your part to protect the reef! The most important thing is to pack “reef-friendly” sunscreen. Do not use sunscreens containing oxybenzone and octinoxate as these are proven to cause coral bleaching. You can also choose to leave a positive imprint during your visit by joining a Coral Gardener program where you can actually adopt your own coral and place it back into its environment. You receive a certificate with your adopted coral’s gps location and your chosen name. This can be a beautiful way to commemorate your honeymoon or visit with your children as you can come back in future years to see how your coral has grown! 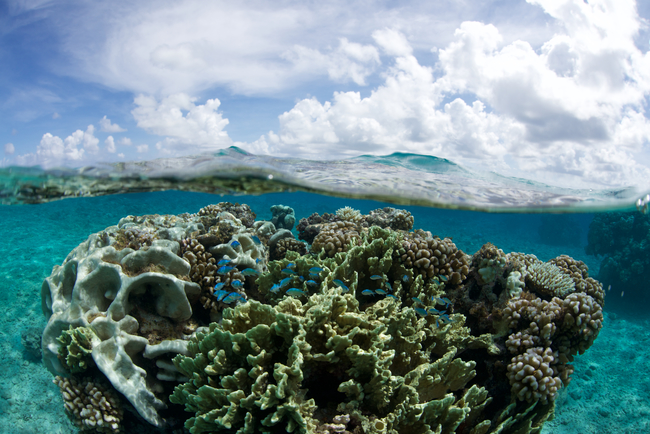