Deep waters with multi-colored fish, fragrance of gardenias and stallions running free are all just a glimpse into the wide array of French Polynesia animals and plants that make their home here. Whether you spend your time horseback riding in the Marquesas Islands or swimming with sharks, or just listening to the chorus of tropical birds from your hammock, The Islands of Tahiti are a paradise for many diverse species of plant and animal life!

Next to staying in the quintessential overwater bungalow, marine life is a primary attraction for the destination. A variety of Tahiti fish species, coral, sharks, whales, turtles and dolphins call the islands home. Every lagoon tour includes some kind of encounter with sharks and rays, even if you choose to enjoy them from the boat! For the more adventurous swimming with these wild animals provides a unique opportunity to see them up close and sometimes to have them brush by you. While directly touching these animals is not encouraged due to their sensitive skins, swimming with them is a fun activity that can be enjoyed by all ages. 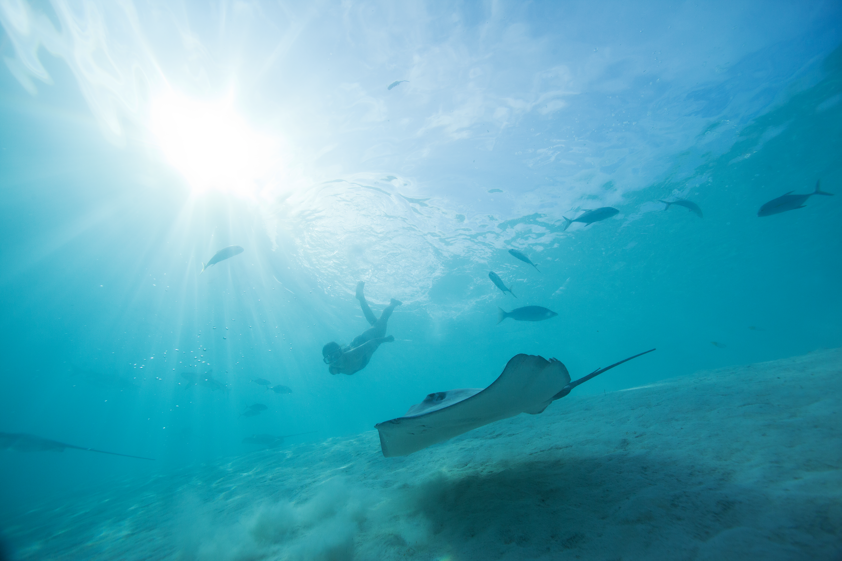 The Tuamotu Islands, encompassed of 78 coral atolls, are known for their abundant sea creatures. Fakarava, a UNESCO Biosphere Reserve, is home to the famed  “wall of sharks,” an annual event that takes place in July. A spawning of grouper fish brings hundreds of sharks to feed and delights divers who come from all over the world to watch this natural spectacle take place.

In fact, The Islands of Tahiti are home to the largest shark sanctuary in the world. In 2012, more than 1.5 million square miles of sea were set aside across the five archipelagoes that make up The Islands of Tahiti as a shark preserve. This move provided a moratorium on shark fishing and finning, protecting more than 20 shark species – including lemon, tiger, gray reef, blacktip, whitetip, black fin, and mako. Sharks are important ecologically and have a cultural significance in French Polynesia, often representing the souls of ancestors in mythology. Several conservation organizations, including Reef Check and Te mana o te moana are engaged in monitoring the shark sanctuaries throughout French Polynesia. Swimming with sharks and rays is one of the most common activities people enjoy on their visits. The sharks on these tours are usually common reef sharks, and are harmless, though quite thrilling to watch as they glide around the lagoon.

Swimming with sharks and rays not your ideal way to relax? How about swimming with wild dolphins or giant humpback whales? The Islands of Tahiti offers one of the few places you can swim alongside wild humpback whales who fill the lagoons from July to October to birth their young. The best places to spot whales are in the Society Islands, such as Moorea and Bora Bora or in the Austral Islands, such as Rurutu and Raivavae. For wild dolphins, head to Rangiroa in the Tuamotu Islands where you can dive alongside them at Tiputa Pass or watch them play in the surf around sunset from the comfort of your lodging.

In nearby Tikehau, also in the Tuamotu Islands, divers come to see what conservationist and marine explorer Jacques Cousteau dubbed “the most fish abundant Tuamotu atoll.” Spend your days snorkeling in crystal clear waters and walking on the pink-hued beaches that are Tikehau’s trademark. The pink hue comes from foraminifera, a microscopic organism that actually has a reddish-pink shell, while the sand is a mix of coral, shells, and calcium carbonate giving the beaches a rosy, romantic hue.

One of the reasons the marine life is so healthy here is because of the abundance of coral, a vital source of life in the oceans. Tahiti corals are invertebrates that build calcium carbonate around their colonies to create the colorful structures that are protective spaces for many types or fish and mollusks. An essential part of the ecosystem, they also help generate oxygen and absorb carbon dioxide. The reefs in The Islands of Tahiti are generally healthy, but with 10% of the world’s coral dead and more than 60% of the world’s reefs at risk, restorative efforts are underway to protect the coral and ensure it remains healthy. One way you can help preserve the coral on your visit is by only using “reef-safe” sunscreen. Make sure it doesn’t contain oxybenzone and octinoxate, which are two types of compounds which are known to cause coral bleaching and poison some fish.

To learn more about coral be sure to plan a visit with the Coral Gardeners on Moorea to adopt your own coral or inquire with your resort whether or not they have a coral restoration program you can learn about on your visit. These programs allow you to tour the corals beneath your bungalow with a guide and learn about how you can enjoy and protect these delicate ecosystems.

While a majority of wildlife can be discovered underwater, there are many creatures wandering around on land. Since The Islands of Tahiti is located in the heart of the South Pacific, there are no mammals indigenous to the islands.  On the Marquesas Islands, you will find wild horses, pigs, and goats roaming freely. Undomesticated animals such as chickens and pigs are offspring from those that were brought thousands of years ago by the first island inhabitants. Horses and goats were introduced later by the Spanish explorers.

There is also a wide array of bird life specific to each island – more than 90 varieties! On the island of Tetiaroa alone, there are at least 15 identified bird species, from the brown booby, greater crested tern to the great frigate bird. In the Austral Islands, lucky visitors can get a glimpse of the kulh lori, a species of lorikeet once coveted for it’s fiery red plumage, which was almost hunted to extinction for the feathers used to adorned the headdresses of chiefs. Conservation actions are taking place now to protect this very special bird. 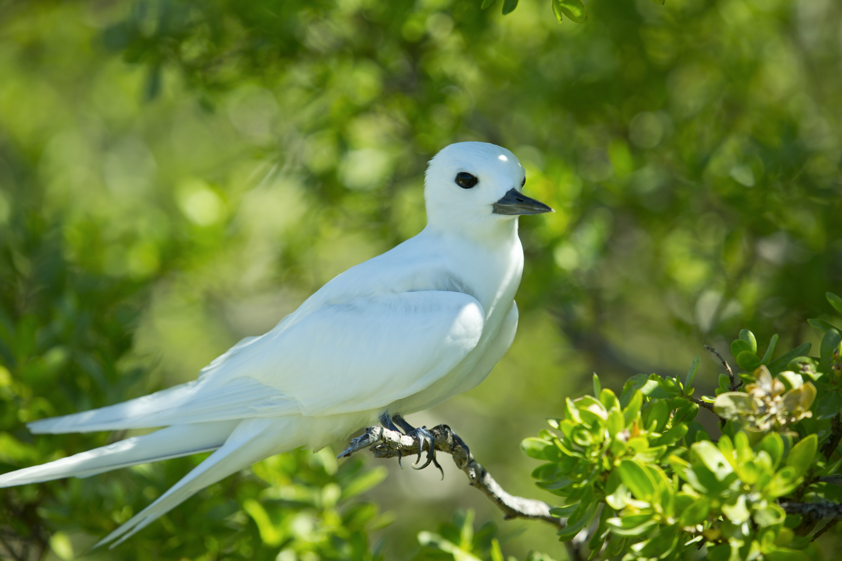 Bird life is threatened throughout the islands due to the populations of non-native rats which were unknowingly brought aboard ships during the colonial era. These rats eat eggs and attack the young of many types of bird species. Tetiaroa is one island which is combating the impact of rats through conservation efforts of the Tetiaroa Society, which has found means of eradicating these invasive mammals and restoring the abundant bird life to the motus surrounding the main island. Indeed, visitors to Tetiaroa can see signs of this rebirth as they near the islands where the rats have been removed. The calls of many types of birds can be heard and the air above the island are filled with soaring species of all kinds enjoying their natural habitat.

Unlike other tropical destinations, there are currently no known poisonous animals in Tahiti. The most dangerous creature you may face are those pesky mosquitoes. Some resorts such as Le Taha’a Island Resort & Spa and The Brando have implemented programs to greatly reduce or remove mosquitos at their resorts by introducing a new sterilization program for this non-native species.

The Islands of Tahiti are dedicated to preserving and protecting the wildlife of the islands. There are many conservation programs throughout the islands that focus not only on eco-tourism efforts, but also providing education to visitors about how important it is to protect the environment. While looking for your hotels in Bora Bora or Moorea, be sure to check out their environmental programs. Many are not only fantastic resorts, but are also homes for turtle rehabilitation or coral restoration projects. 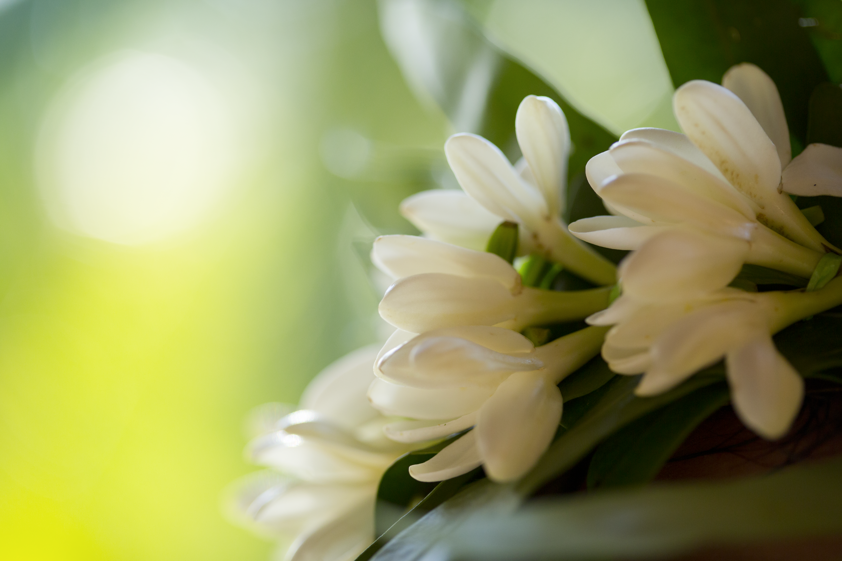 The Islands of Tahiti is a tropical paradise where everywhere you look cool greens, cheerful yellows, vibrant magentas, and brilliant whites dot the landscape. The intoxicating aromas of Tahitian vanilla orchids, frangipangi (plumeria), heliconias, orchids and, of course, the iconic Tahiti tiare flower or gardenia taitensis. Tiare means “flower” in Tahitian so the Tahiti tiare is literally the flower of Tahiti. The most authentics resorts, Tahitian Guesthouses, and lodges have their rooms filled with local flowers arrayed in whimsical designs, adorning the bedspread, pillows and countertops. The traditional Polynesian welcome includes a fragrant lei of many types of flowers being draped over your neck upon arrival, always with a warm smile and a “ia ora na e maeva” (hello and welcome in Tahitian). Flowers and plants are an integral part of the Tahitian experience.

Beyond making for beautiful scenery, the variety of plants also sustain a rich culinary heritage. Only 40% of plants are considered endemic to The Islands of Tahiti, most having been brought by the first island inhabitants thousands of years ago, plants such as uru (breadfruit), pineapples, and even coconuts. The best pineapples in the world are said to come from Moorea so it is common to tour the pineapple fields here and go for a tasting. Of course, no trip to the islands is complete without sipping the water from a fresh coconut or tasting the juice from a ripe pineapple! Even Tahitian vanilla comes from an orchid that originated in Central America but was perfected into a hybridized species unique to French Polynesia.

On the volcanic islands such as Tahiti, Moorea, Raiatea and Taha’a, you can take a journey into the mountainous jungles and low valleys to find mape (chestnut) trees easily spotted by their graceful wing-like trunks which fan around around their base. You can also find wild bananas, tamanu, and noni fruits.

The low lying atolls have poorer soil quality which results in fewer endemic species. One important species you can find here is the pandanus or pisonia which is used for weaving hats and baskets, decorating houses and boats and serving as a roof on your overwater bungalow! Of course, you can also find coconuts in the atolls as well which serve as an important hydration source where freshwater is scarce.

Exploring Wildlife Throughout The Islands of Tahiti

The Islands of Tahiti is a 2.5 million square mile natural aquarium waiting for you to jump in and explore! With an array of water activities available, there are many ways to see the vast marine life of the islands up close. Some popular tourist experiences include snorkeling, diving, swimming with sharks and rays, swimming with dolphins and whales.

If you are not much of a water person or just need some time away from the sea, there are also amazing land tours that showcases another side of the islands natural beauty. Taking a circle island tour on the island Tahiti is a great way to learn about Tahitian culture and also see cascading waterfalls.

Chat with a Tahiti Vacation Specialist today, or check out some vacation package deals to begin planning your trip of a lifetime.