Tahiti Swimming with Sharks and Rays

Tahiti Swimming with Sharks and Stingrays

Swimming with Sharks in Tahiti

French Polynesia has the distinction of being the largest designated shark sanctuary in the world. Swimming with sharks and stingrays is a very popular activity enjoyed by locals and visitors alike. Snorkeling tours and snorkel safaris take place in shallow waters and often include encounters with many species: black tip reef sharks, stingrays and manta rays, sea turtles, and occasionally lemon sharks and dolphins! You can swim with sharks in Bora Bora, as well as many other islands including Moorea, Rangiroa, Fakarava and more. Swimming with whales is also possible during certain seasons (August-October). The Bora Bora lagoon is home to many coral gardens, shark species and tropical fish. It seems everyone comes here to relax in the crystal clear still waters!

You can also enjoy shark diving to see larger species, such as hammerhead sharks and silvertip sharks. On the island of Fakarava, the second largest atoll in the Tuamotus and a UNESCO Biosphere Reserve, you can dive in July during the annual grouper feeding and see the famed “wall of sharks” where more than 700 sharks flood into the south pass of the island to feed on grouper. As these hapless groupers feed the sharks divers watch from a distance entranced! A thrilling event for any experienced diver, but not for the faint of heart! Explore dive vacation packages.

The shark and stingray are both important cultural icons, often seen in various forms in stylized tattoos. Sharks called  ‘ma’o’ or “moko,” are a symbols of protection, ferocity and respect. So it’s no surprise that here, swimming with sharks is considered a safe and enjoyable experience. In Hollywood sharks have the reputation of being blood-thirsty, threatening creatures, but in The Islands of Tahiti where violence against sharks is prohibited, the relationship between sharks and humans is more harmonious. All sharks in The Islands of Tahitiincluding lemon, tiger, gray reef, blacktip, whitetip, black fin, silvertips, mako, hammerhead and thresher sharks – are under protection from fishing, finning, and the import and export of all or parts of these valuable species.

The are also an essential species for maintaining a healthy ecosystem. One of the only large predators in The Islands of Tahiti sharks sit at the top of the marine food chain. Some sharks are expert hunters while others prefer to scavenge but all are vital to the healthy balance of the marine ecosystem. Sharks are believed to have evolved more than 400 million years ago and are incredibly well-developed and adapted to their environment.

Swimming with Sharks and Stingrays in Tahiti 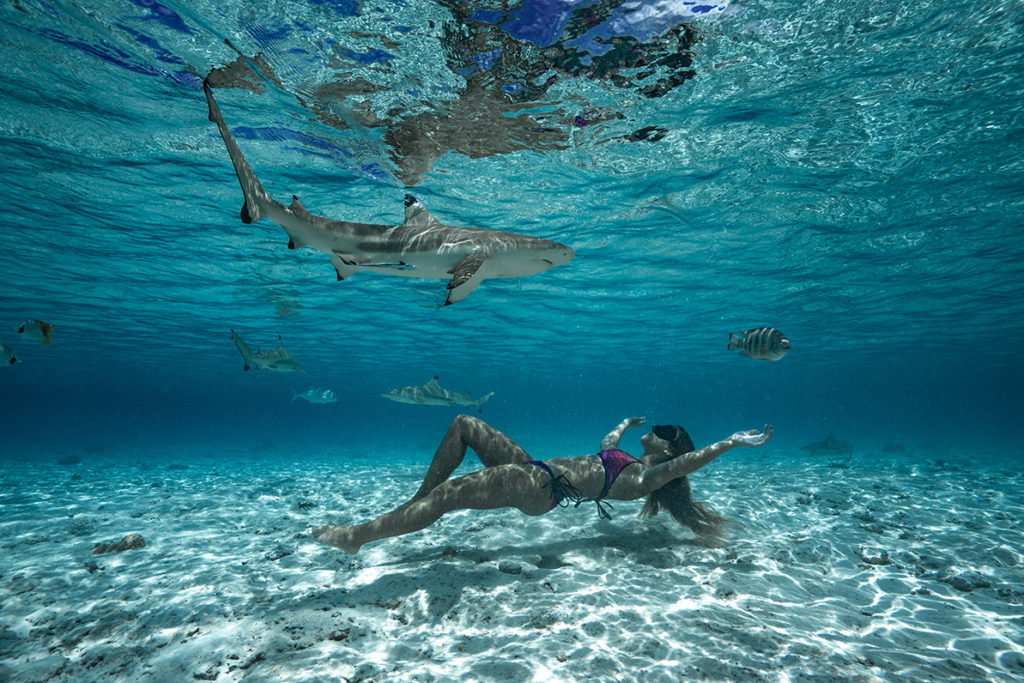 There are more than 350 species of sharks known worldwide and that 19 of them can be observed in the waters of The Islands of Tahiti .

Various types of rays can also be found here and often arrive with sharks (they are close cousins sharing a prehistoric ancestor). Both sharks and rays are cartilaginous fish, which means their skeletons are made completely out of cartilage.

It is common to book shark and ray tours on the islands of Tahiti, Moorea, and Rangiroa.

Is it safe to swim with stingrays? Yes, but there are some things to consider. The most common kind of injury from a stingray is stepping on one accidentally. When you are in the lagoon adopt a shuffle by moving your feet along the sand rather than picking up and placing your feet. This alerts any sleepy stingrays that you are there, allowing them to move out of your way. It is also recommended you wear reef or water shoes while in the lagoons to minimize any potential injuries from stingrays, stonefish, or even coral.

Here is a list of the most common sharks and rays found in French Polynesian waters:

See anything missing from this list? Great White sharks are not commonly spotted in any areas where people swim with sharks.

When to Go Swimming with Sharks in Tahiti

The Islands of Tahiti are a tropical paradise so the weather is usually around 80 degrees all year round. You can swim with sharks, rays an even dolphins anytime of the year, but if you want to also swim with humpback whales you will need to visit from August through October.

·      “Reef-Safe” sunscreen is a must! Make sure you keep the natural environment healthy by only taking “reef-safe” sunscreen. Do not use sunscreens which list oxybenzone & octinoxate in the ingredients.

Even if you don’t wish to swim with sharks and rays, that there is a variety of other beautiful marine life to observe such as  the coral reef, a myriad of fish, and the beautiful turquoise water.