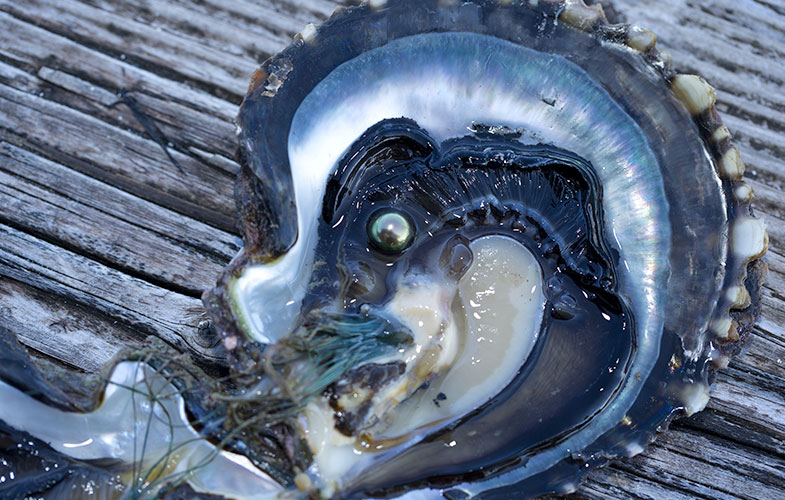 Learn where the best locations to shop for Tahitian pearls are in French Polynesia. From necklaces to engagement rings, you can find Tahitian pearls for sale in one of Tahiti’s local pearl showrooms, farms, or markets.

Tahitian pearls are also some of the largest pearls globally, ranging from approximately 8 mm to 18 mm. The only larger harvested pearl is the golden South Sea pearls, growing as large as 20 mm.

The warm lagoons of many of the islands and atolls in French Polynesia are among the most perfect environments for black Tahitian pearls because of the temperature, density, salinity, light, and pure climate. Commonly known as “Black Pearls,” Tahitian pearls range widely in pricing, size, shape, and pearl colors. From the darkest black to shimmering shades of green, blue, bronze, aubergine, or even pink – these are indeed the jewels of the ocean.

Tahiti is the best place in the world to shop for Tahitian pearls.

With first-hand expertise and an infinite selection from dozens of major pearl retailers on all the islands, visitors quickly discover that French Polynesia is the best place in the world to learn about and shop for pearls. Visitors are encouraged to visit several merchants during their vacation to learn about judging quality and style to help determine their preferences.

Tahitian pearls can be found at Resort and cruise ship shops, pearl showrooms on Tahiti, Bora Bora, and Moorea, and family pearl farms on Huahine, Taha’a, and throughout the Tuamotu Atolls – all offer Tahitian pearls.

Pearl shops such as Robert Wan, Tahia Collins, or the Tahiti Pearl Market, are all recommended places to begin the search for your own perfect Tahitian Pearl.

Depending on what you are looking for, you will be able to find Tahitian pearls for sale at Robert Wan Tahiti – Musée de la Perle, Tahia Exquisite Tahitian Pearls, or Mana Pearl, or the well-known where you can find the pearl that suits your style.

The prices of Tahitian pearls will range depending on certain criteria such as luster, size, shape, mounted, or unmounted. Black pearls are rarer and are typically more expensive, so be sure to request a certificate of authenticity from your reseller to guarantee quality.

The Champon Pearl Farm on the Island of Taha’a is an authentic family farm that produces the famous Tahitian black pearls.

The Pearl farm offers visitors a large choice of pearls, loose or set on jewels. The best quality pearls are already set on 18kt white or yellow gold, but visitors also have the option to get a less expensive pearl with sterling silver or leather.