The Land of History

Welcome to the magnificent Marquesas Islands. Luscious islands emerge from the Pacific Ocean, a land of history and legends, each one more fascinating and unforgettable than the last.

Marquesas Islands on a Map

Where Are The Marquesas Islands?

The Marquesas’ archipelago is located 932 miles (1,500 km) northeast of the island of Tahiti and spread out over 12 islands, of which only six are inhabited. The Marquesas Islands are hard to beat and impossible to forget, filled with rich culture, history, and endless adventures. 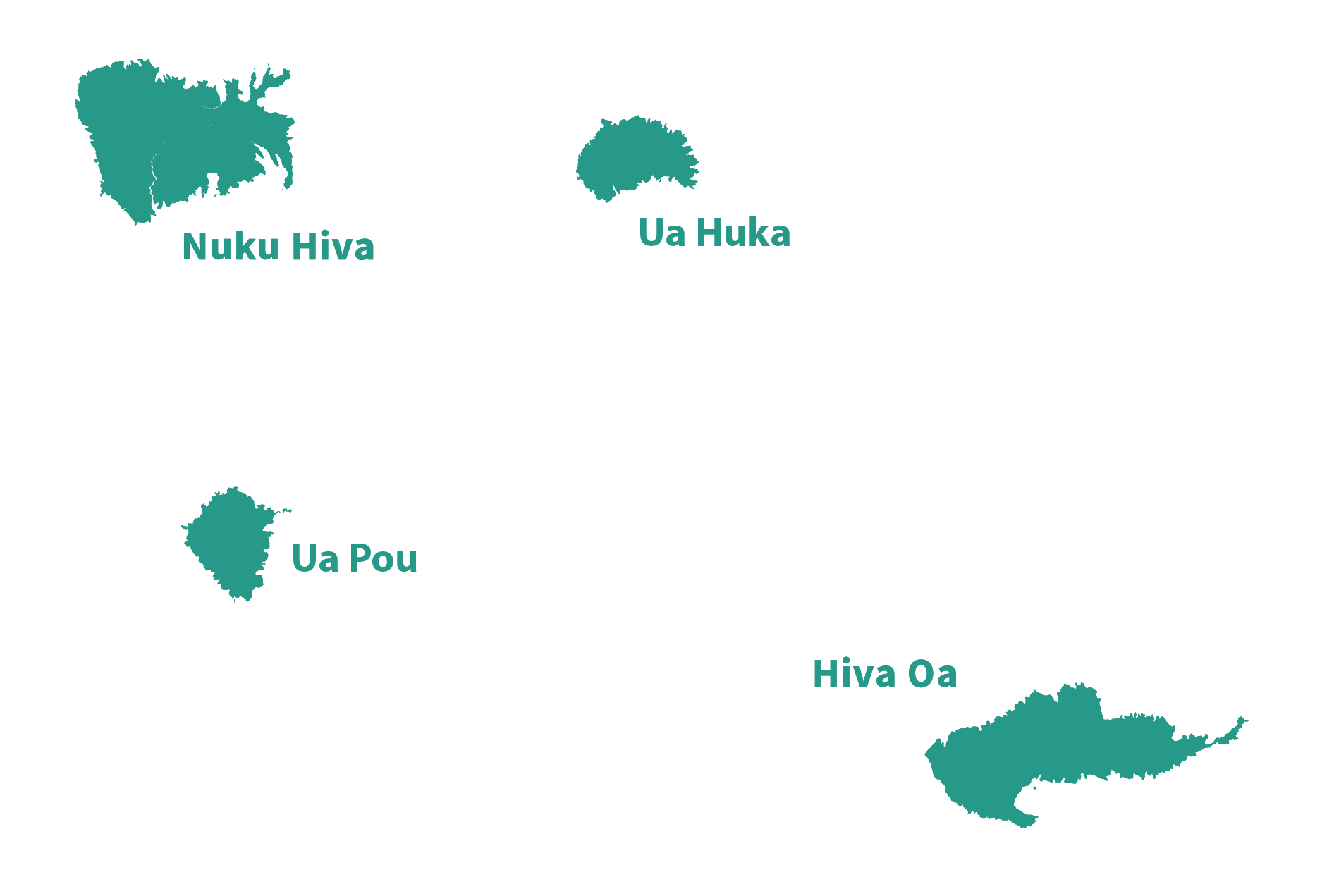 About The Marquesas Islands

From Taipivai Valley and Hatiheu Bay to Anaho and Hakaui, where the highest waterfall in The Islands of Tahiti is located, travelers are invited to admire cultural and natural phenomena. Surrounded by cliffs, the coasts of the Marquesas Islands are a mix of black sand beaches and gorgeous bays. In the lush rain forest, where thousands of pre-European artifacts lie, you’ll discover wild horses, goats, boars, and other wildlife.

Whether you go hiking, horseback riding, or on a 4-wheeler ride, don’t miss exploring the breathtaking landscapes of the Marquesas, featuring waterfalls, peaks, valleys, and rivers. Beaches sit upon the open oceans, archaeological sites cover the islands, back road tours take you through the thick trees, and incredible views are just a short hike away. It’s 405 square miles of enjoyment for adventure lovers.

Author Herman Melville wrote his novel Typee in 1846 after being influenced by his adventures in the Taipivai Valley. In the novel, he tells the story of a sailor who stumbles upon a seemingly uninhabited island. He wandered The Marquesas Islands, lonely and fearful of cannibals, who he’d heard roamed the island. Finally, he was discovered by the Taipi clan, who surprisingly welcomed him with open arms. He became the first European ever to come into contact with this secluded community on this remote island in the South Pacific. Herman Melville reveals that this sailor was him, and he returned from French Polynesia to tell his story. This tale became Melville’s most famous novel during his lifetime. Visitors to the Marquesas Islands can follow Melville’s footsteps and see the numerous artifacts encapsulated in the archipelago’s rich back roads as if time stood still.

The Memories Of Gauguin And Brel

In the 1900s, painter Paul Gauguin and later musician Jacques Brel came to the Marquesan island of Hiva Oa seeking solitude and inner peace. Walking in the same artistic footsteps they did includes visiting the replica of Gauguin’s “Maison du Jouir” and the small museum dedicated to the painter and his home. While he lived in the Marquesas Islands, Gauguin painted some of his most famous artwork, sourcing his inspiration from the islanders’ everyday life, as well as  legends and old religious traditions representing imaginary scenes. Brel’s final album, Les Marquises, was inspired by his time living on Hiva Oa. Finally, visit their graves at the Calvaire Cemetery, where they both rest yards from each other, facing Taaoa’s Bay under the intoxicating fragrance of plumerias.

Those underwaters of the Marquesan island are filled with exciting treasure. The diving center in Hiva Oa, Marquises Diving, will take those brave enough to scuba dive in the open oceans to see a myriad of underwater species that have flourished in amazing biodiversity. Along the coast, swimmers and divers can experience manta rays, eagle rays, sharks, jackfish, tuna, swordfish, and many more. If you’re lucky, you might even be able to see some of the hundreds of dolphins who make their home near the shores! 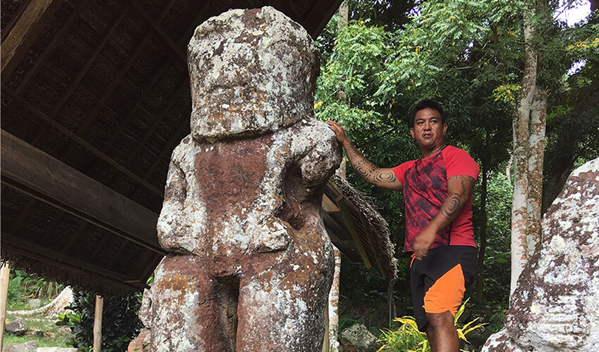 The island of Hiva Oa is worth visiting to see the various archaeological sites there, like me’ae in Puama’u, home of the largest tiki statue in The Islands of Tahiti. You can find “Takaii” (8 feet / 2.4 meters), a unique, happy-looking statue hidden among the thick trees. Ta’a’oa is home to a huge cult area featuring lithic structures and tiki statues that blend in with the primitive nature around them. Ancient petroglyphs can be found in the surrounding area at Tahuata. Travelers can see giant banyan and breadfruit trees, and towering coconut and papaya trees. 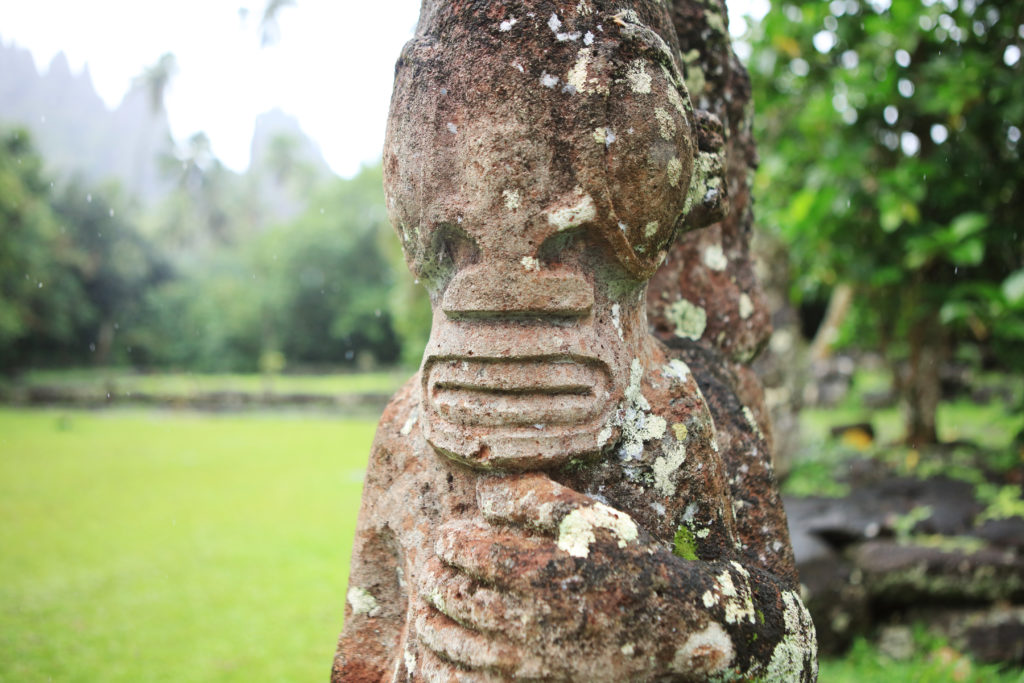 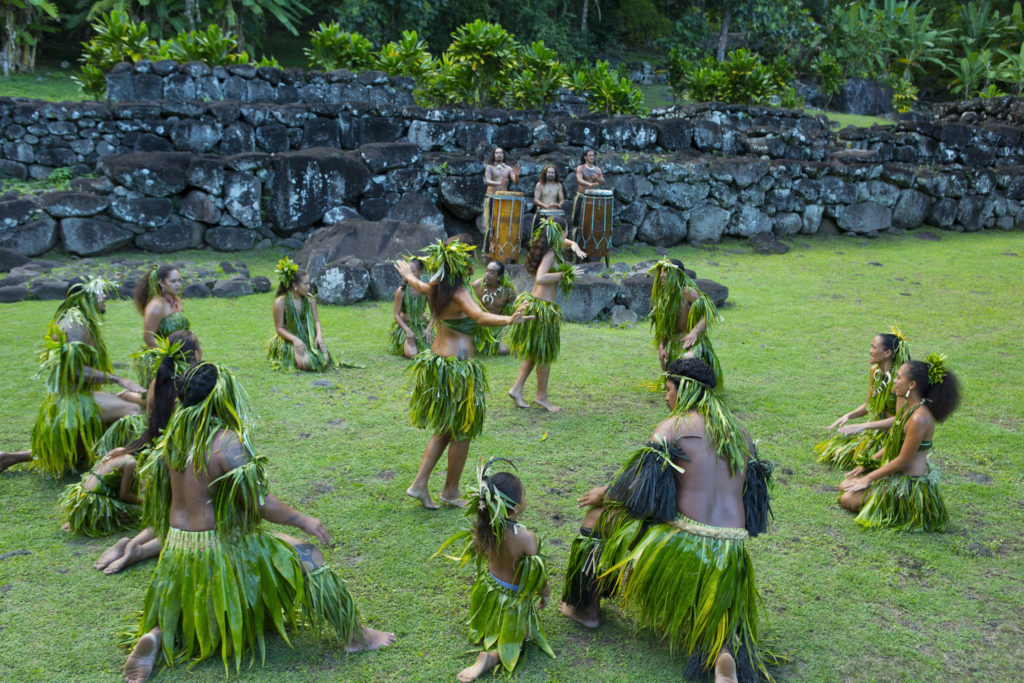 Today, this island, Hiva Oa, is commonly referred to as the “Garden of the Marquesas” thanks to its fertile and lush land. The island could be referred to as rugged, and if you’re lucky, you could stumble along one of the many archaeological sites that remain tucked away, even after hundreds of years. Although its coasts are lined with beaches and diving cliffs, Hiva Oa feels remote and secluded. There are areas where visitors cannot see any signs of civilization, perfect for a hike away from the hustle and bustle of everyday life. This island is also home to the largest tiki statues on The Islands of Tahiti.

The island’s administrative hub and main village, Atuona, is on the southern end of Taaoa Bay. The island’s two highest peaks are towering behind the village Mount Temetiu, 4,186 ft. above sea level, and Mount Fe’ani, 3,366 ft. above sea level. Many famous writers, musicians, and artists of various kinds have sought solitude in the hills of this island.

In the islands’ legend, Ua Pou symbolizes the entrance pillars to God’s house and is the third largest of the 12 islands. Huge basaltic columns reach to the sky and hold the names of legendary warriors: Poutetaunui and Poumaka. The highest of these pillars and the highest point in all the Marquesas Islands is Mount Oave. In 1888, these pillars inspired poet Robert Louis Stevenson, who referred to them as “volcanic arrows looking like a church bell tower.” They proudly overlook the bay of Hakahau Village, the main village on the island. 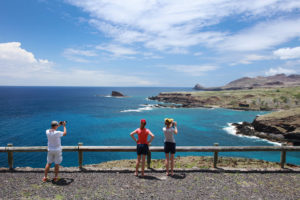 Ua Huka symbolizes the “food basket” of God’s house in the legend, features even more untouched beauty, and is renowned for its dry soil and landscapes. The island itself is shaped very much like a crescent. Wild horses gallop as far as the eye can see around this desert-colored land. Goats climb up on the island’s high plains. Peaceful and mystical, Ua Huka invites the traveler to discover a secluded universe, where the island’s ancestors are not just a part of the past but still very much part of the islanders’ everyday life. 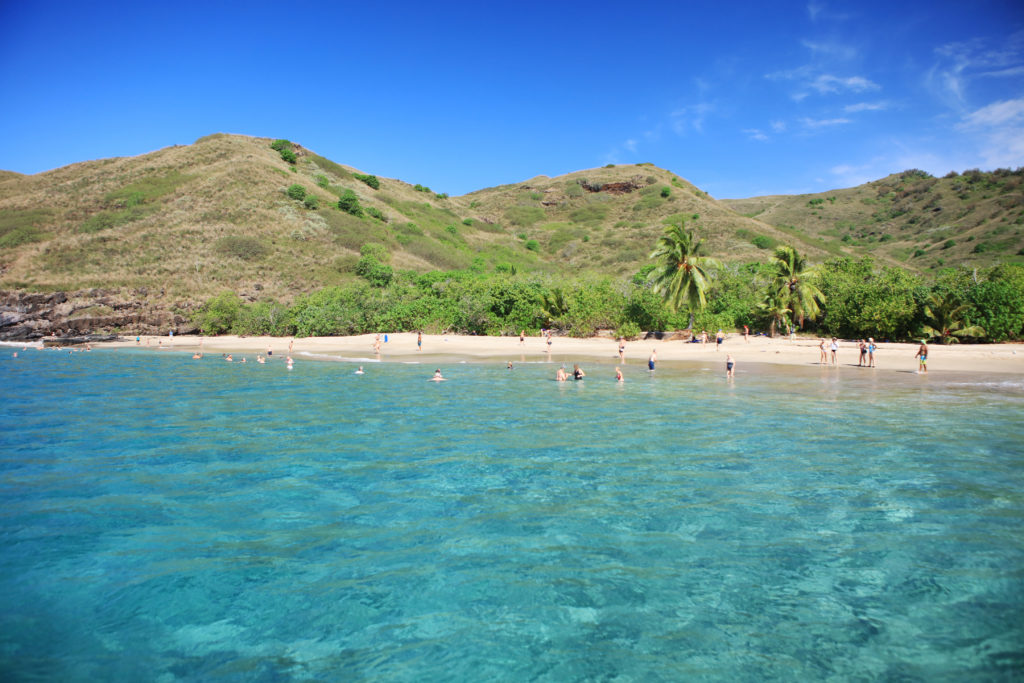 Tahuata symbolizes “sunrise” or “the enlightening home” at God’s house, and it is also the smallest of the inhabited islands of Marquesas Islands. Despite its small size, Tahuata is known for being visited by the famous British explorer, Captain James Cook, in the 1700s. The only access to this remote island is by sea from the island of Hiva Oa. The island offers charming discoveries to the privileged traveler. From its fertile valleys to its crystal-clear bays, Tahuata is an exquisite haven of peace and a place of history and creativity. Most inhabitants make a living from their remarkable fine artwork, such as carved bone and rosewood – or miro (the Portia tree) carving. Mono’i, or sacred oil, is made following the scents of traditions and secrets, like an invitation to a mesmerizing perfume beautifully named “love potion” by the islanders. The creation of these perfumes is an art that spans thousands of years and is unique to these islands.

Fatu Hiva: Home of the Bay of Virgins

Fatu Hiva symbolizes the roof of Gods’ house: a small but stunning island. Arriving by sea, intricate landscapes and pristine vegetation greet you. Fatu Hiva will mesmerize visitors. Streams cut through valleys, and cliffs drop into the sea, making views from any angle on the island nothing short of dramatic. In 1937, the explorer and author Thor Heyerdahl and his wife set foot on the island to live like the dawn of the new world in search of a genuine return to nature. He later wrote a book about his experiences, titled after the island. Not much has changed since then. Today, most local people live around the village of Omoa, a beautiful harbor, where they make traditional and renowned tapa out of tree bark. The area of Hanavave is sheltered within an amazing bay: the Bay of the Virgins, probably one of the most beautiful bays on Earth, especially at dusk when the light blazes through the volcanic peaks, turning the landscape into an unreal and unforgettable scene.