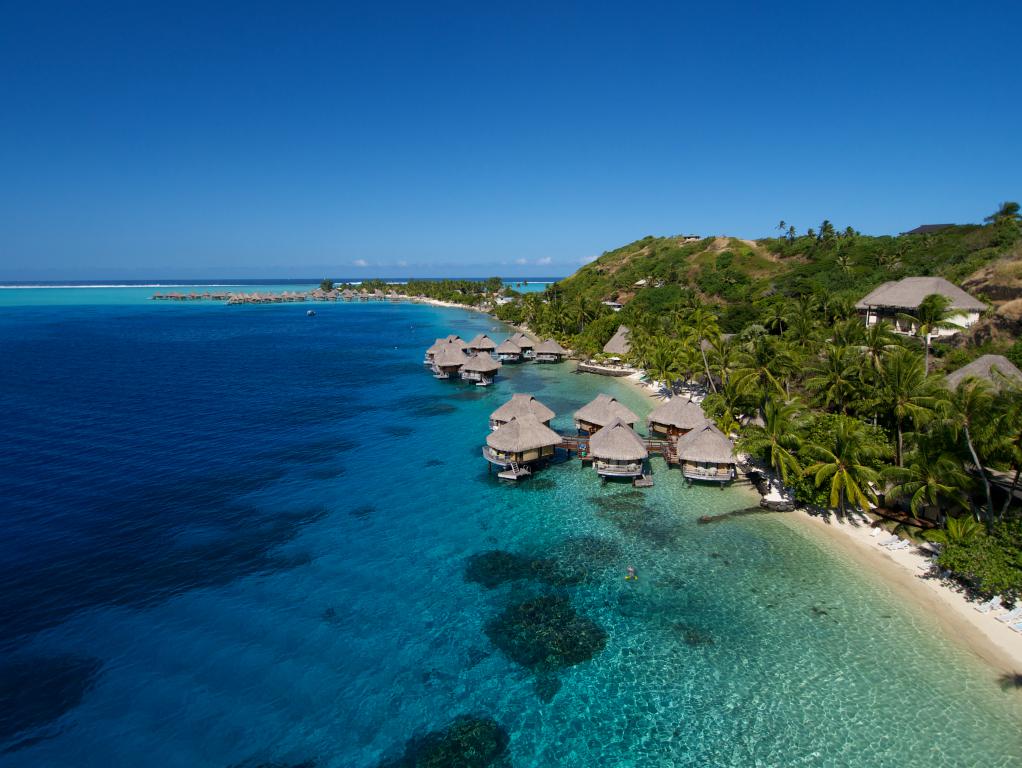 When planning on traveling to Bora Bora, visitors extensively research and plan their trip to one of the most popular and romantic destinations on The Islands of Tahiti. They are pleasantly surprised by the new discoveries that await them amongst the island’s blue waters, coral gardens, and white sandy beaches backed by lush green vegetation during their visit. Even the most prepared visitors can learn some new facts about Bora Bora, the unique and breathtaking island in the South Pacific. 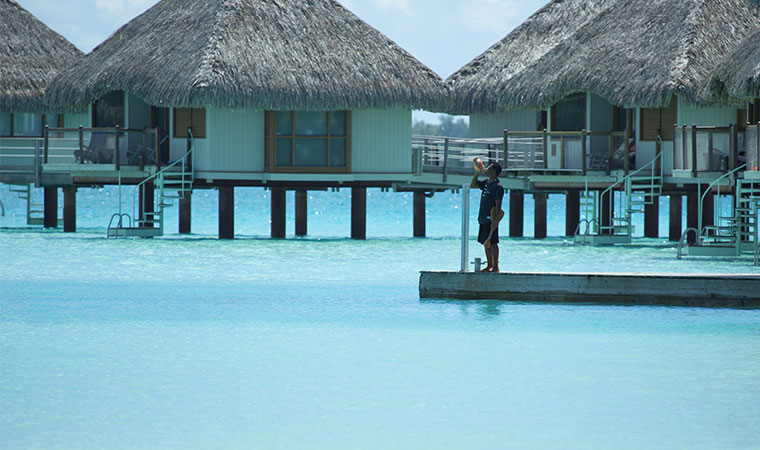 The island of Bora Bora is made up of three small villages, Anau, Faanui, and Vaitape. Vaitape is a destination for visitors searching for signature souvenirs such as Tahitian black pearls, shell jewelry, colorful pāreu wraps, wooden handmade crafts, and scented soaps and oils. Vaitape is easily seen by taking a short walk around the public beaches of Bora Bora, and it is generally crowd-free, except when cruise ships and touring ships are in the area. 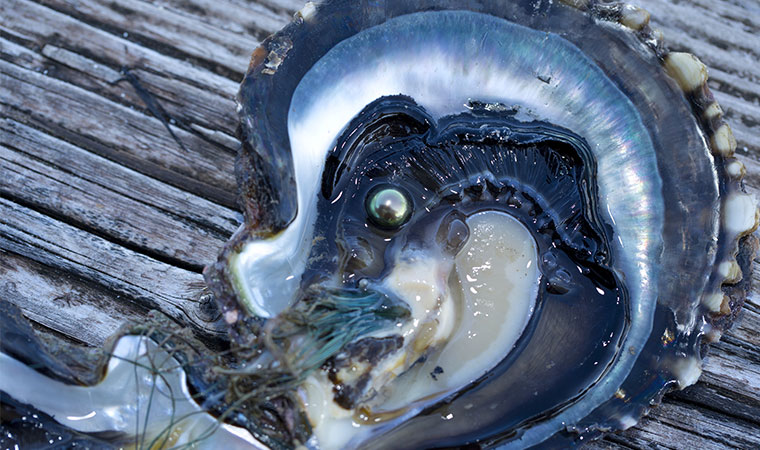 While Bora Bora is one of the best places in the world to relax and unwind, it is by no means lacking in adventure. The distinct geography on the island of Bora Bora invites visitors to participate in one-of-a-kind experiences, such as scuba diving, reef discovery, safaris, hiking, fishing, and even parasailing and seaplane charters. These experiences, especially those that offer a birds-eye view, allow visitors the awe-inspiring opportunity to explore some of the most beautiful lagoons in the Society Islands, see hundreds of different species of marine life, such as manta rays, and soak in the sights that simply cannot be experienced from the lounge chair at your resort.

Located in the Society Islands in the South Pacific Ocean, halfway between Australia and the USA, the exclusivity and aqua-centric nature of Bora Bora is what makes the tropical island a dreamy paradise. And, because the island is smaller, Bora Bora visitors will enjoy a quiet and comfortable solitude while visiting, allowing travelers to recharge and relax in luxury without disruption.

Bora Bora is a Romantic Paradise

The island of Bora Bora is a honeymooner’s paradise. The ultimate setting for romance is largely mainly due to the iconic beauty of Mount Otemanu, which rises from the sea like an emerald jewel, encircled by gorgeous coral reefs and several white sand islets called motus. The legendary overwater bungalows of Bora Bora extend from each motu, offering unlimited views of Mount Otemanu from virtually everywhere on the island.

From Bora Bora, you can visit Tupai (also called Motu Iti), located about 10 miles north of Bora Bora, famous for its resemblance to a heart. There are no inhabitants on Tupai and no resorts, so your time on this dreamy island is limited to day visits only. Best viewed by air, but for those that would like to set foot on the isle of love, there are many options for this too. 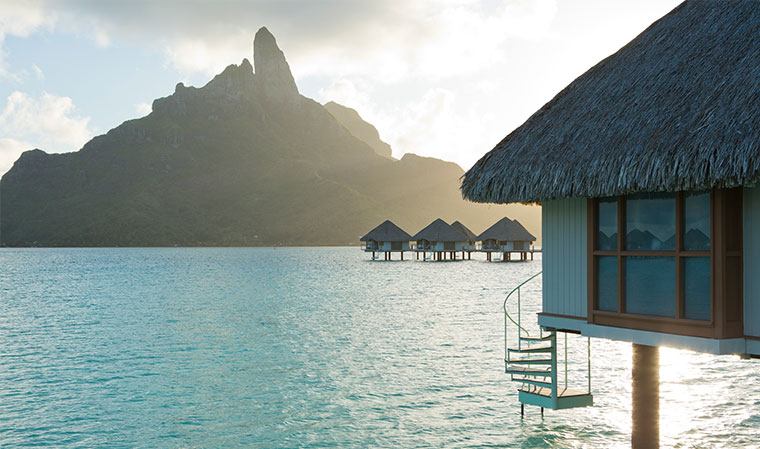 Bora Bora was among one of the first places in the world where you could find overwater bungalows. Overwater bungalows originated in The Islands of Tahiti in 1967, and their popularity has now spread across the globe. The ideal place for romance, the overwater bungalow provides direct access to the lagoon from your private deck, where you can wake in the morning to watch the sunrise over Mount Otemanu from your bed. Many even allow you to watch the passing schools of fish through a glass window in the floor!

Discover the Best Tahiti and Bora Bora Overwater Bungalows as you are planning for your trip. 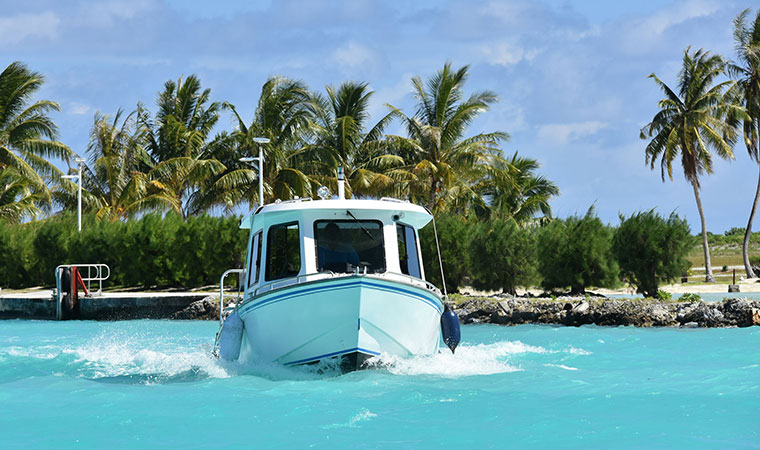 While both public transportation and taxis are available, resorts and restaurants on Bora Bora are within walking distance, so visitors to the island should bring their most comfortable pair of flip-flops.

Bora Bora can be reached by boat, helicopter, plane, and cruise ship. The flight is only 50 minutes from Tahiti or Moorea. The port of Bora Bora is not large enough for a cruise ship to dock either, so tender boats ferry passengers between the ship and Vaitape wharf as an additional public transit option.

How Did Bora Bora Get its Name?

The island of Bora Bora was initially called “Pora pora mai te pora,” meaning “created by the gods” in Tahitian. It was often abbreviated as “Pora Pora” meaning “firstborn.” In the 13-letter Tahitian alphabet, there is no “b.” But, to settlers and explorers visiting the islands for the first time, the island’s name was quickly heard and misinterpreted as “Bola Bola” or “Bora Bora,” and it’s why we refer to the island as Bora Bora today. 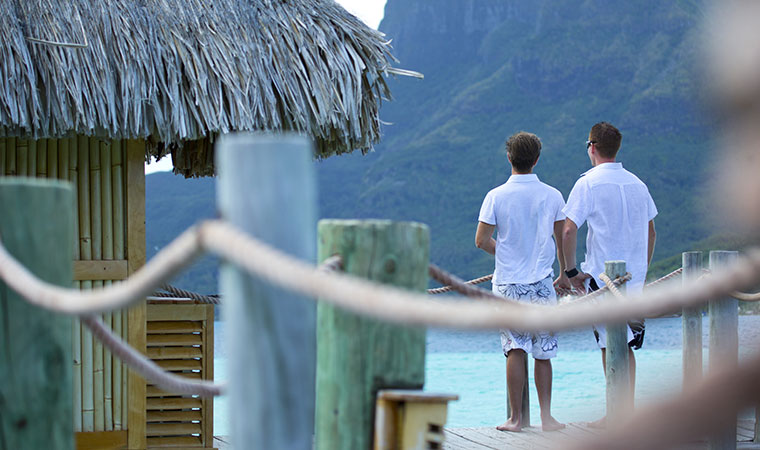 Bora Bora is home to the remnants of a once active volcano approximately a million years ago in the very center of the island. The extinct volcano rises to two peaks, Mount Pahia and Mount Otemanu.

The magnificent vistas from the dormant volcano open to spectacular views of the coral reef, soft sandy beaches, and impressive mountain terrain.

Bora Bora’s rich history doesn’t stop there. During World War II, a U.S. supply base was established on Bora Bora in direct response to the bombing of Pearl Harbor in 1941. From early 1942 to mid-1946, during what is now known as “Operation Bobcat,” the island of Bora Bora, was transformed into a base where more than 6,000 men were stationed. During Operation Bobcat, the island acted as an oil depot, an airstrip (Motu Mute), seaplane base, and defensive fortifications center.

Until Tahiti-Faa’a International Airport opened in 1961 on the island of Tahiti, Motu Mute was French Polynesia’s only international airport. Today, the runway on Motu Mute is a reminder of those war days. Eight massive, seven-inch naval cannons were installed around the island during the war. Today, all but one is still in place.

Bora Bora is famous worldwide, so it’s no surprise the island attracts movie stars and film directors looking to showcase their work against the world’s most gorgeous backdrop.

“Couples Retreat,” the 2009 romantic comedy starring Vince Vaughn and Kristen Bell, was filmed at the St. Regis Resort in Bora Bora, and “The Bachelorette” season finale starring Ali Fedotowsky was filmed at the Conrad Bora Bora Nui, the same place “Keeping Up with the Kardashians” shot three episodes of its sixth season while on the island. 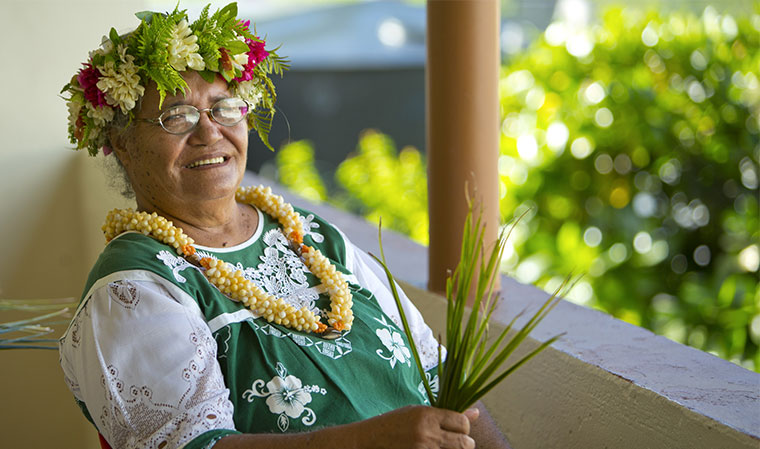 The native art and culture of Bora Bora and the unconditional love and reverence locals have for their rich history, and legendary customs make the island a unique destination. 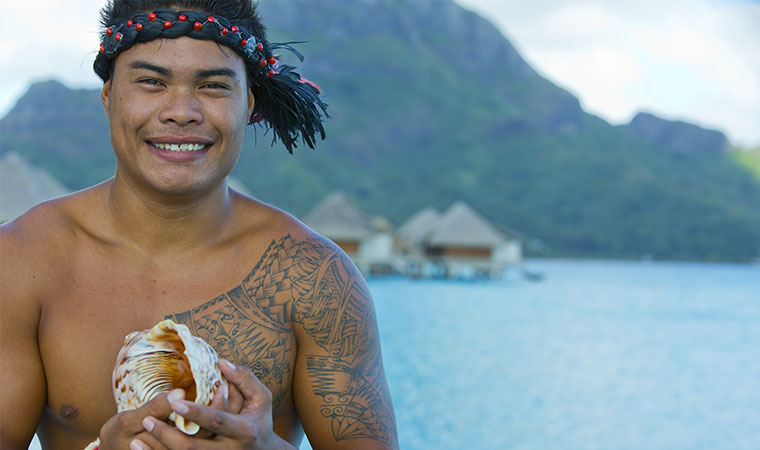 Bora Bora tourists will quickly learn that the Tahitian language and experiences of French Polynesia are captured in the region’s arts and crafts, dance, and tattoos, which tell the history of the locals’ ancestry.

Bora Bora culture was suppressed for decades, almost to the point of total disappearance, and has come back more vibrant and alive than anyone could have imagined. Yearly events like the Heiva i Fete showcase the value placed on tattoos, dance, and art.

The word tatau (tattoo) originated in The Islands of Tahiti, and each tattoo has a meaning that tells the story of each Tahitian’s personal history and ancestry. This aspect of Tahitian life, combined with orchestras that use percussion instruments such as the to’ere, the fa’alete, and the pahu, as well as guitars and ukuleles, were introduced to Bora Bora and helped shape the culture, dance, and relationships in Bora Bora and The Islands of Tahiti as a whole. 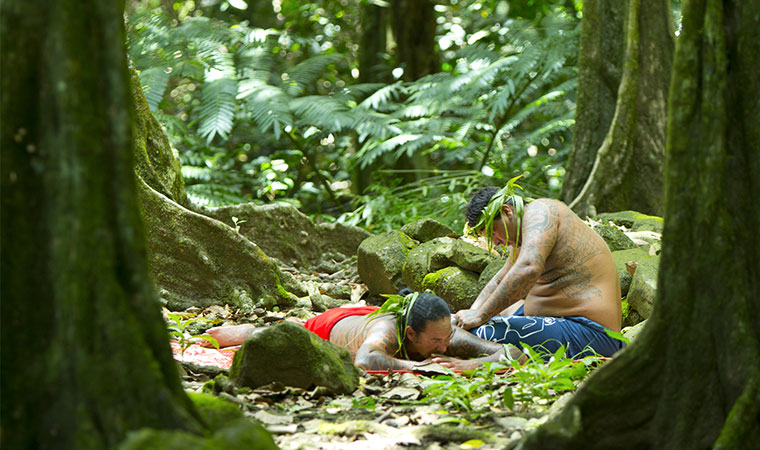 The style of music that developed on the islands has hints of country western mixed with classic South Pacific island style. The art of dance on Bora Bora is still alive and plays a big part in island festivities throughout the year, telling the story of their culture and history much like the art that lives on their skin.

Tattooing was widely practiced and found throughout French Polynesia with the exception of the southern Austral Islands and the eastern Tuamotu Islands. It was in the Marquesas Islands that the art of tattooing reached its peak of development. Increasing its richness and complexity through the use of motifs, the art quickly reached Bora Bora and rapidly spread its artistic influence throughout the rest of the islands.

Today, visitors from all over the world travel to The Islands of Tahiti to participate in the sacred art of tattooing with a Polynesian tattoo artist.

During your visit, you will experience something intangible that will find its way home with you as well. It’s a feeling the islanders call Mana, and it is the spiritual force at the center of the Polynesian belief system. 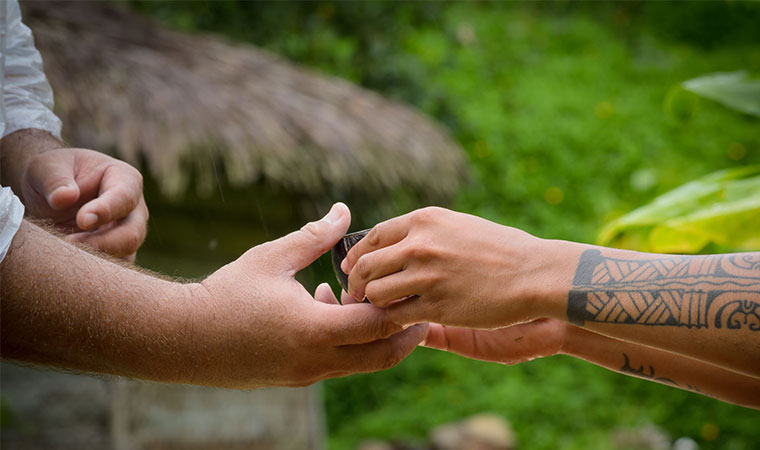 As one of the 118 islands of Tahiti, its allure comes from its unmatched landscape beauty and the richness of Tahitian culture. The people of Bora Bora embrace visitors with the aromatic tiare leis and welcome them with warm smiles and traditional music and dance. The essence of Bora Bora seduces all who visit and the memory of their time there remains like a beautiful dream.

During your visit, you will experience something intangible that will find its way home with you as well. It’s a feeling the islanders call Mana, and it is the spiritual force at the center of the Polynesian belief system.

Mana is a concept that is difficult to describe, though it can be profoundly felt and experienced throughout The Islands of Tahiti. Mana is an omnipresent mystery that connects all living things and those that came before. It can be channeled to increase strength, wisdom, or peace and encompasses the dualities of life.

To truly experience Mana, Bora Bora visitors must let go and let themselves become completely immersed in all French Polynesia has to offer them. Take part in the culture and join in by dancing, singing, and exploring. Peaceful moments spent enjoying nature on the island and encountering wildlife such as rays and sea turtles are also beautiful ways to experience the embrace of Mana.

From the traditions of art and tatau to music and dance, all aspects of Tahitian life and culture give voice to their Mana and are a potent part of the visitor experience in Bora Bora and The Islands of Tahiti. Your visit will be greatly enhanced by learning about Tahitian and French Polynesian Culture during your visit.

It is easy to see why Bora Bora is world-renowned for romance and relaxation but now you see it is also so much more! Explore Bora Bora and The Islands of Tahiti.